The U.S. Department of Agriculture has provided $2.9 million for the University of Arizona to improve the safety and post-harvest quality of field-grown organic leafy greens.

"This is a very comprehensive project covering all aspects of leafy green production, from field to fork," said principal investigator Sadhana Ravishankar, an assistant professor in the UA's department of veterinary science and microbiology in the College of Agriculture and Life Sciences.

"The goal is to provide safer and better-quality organic leafy green products for consumers and to increase profitability for growers of organic produce."

Leafy greens include spinach, lettuce, arugula, cabbage and radicchio, all of which are part of the grant in one way or another.

"The large foodborne outbreak affecting mostly organic spinach in 2006 was a reminder of how important it is to ensure safety of leafy greens," Ravishankar said. "The two most common disease-causing pathogens in leafy greens are Escherichia coli strain O157:H7 and Salmonella enterica. Contamination can come from human or animal excrement, for example from runoff from nearby farms, communities or from contaminated irrigation water."

While cooking eliminates both E. coli and Salmonella, consuming raw leafy greens can pose a risk.

"We are going to test whether these plant extracts and essential oils inactivate bacteria if incorporated into an edible film lining the insides of the bags in which leafy greens are sold or as pieces of edible film mixed into the salad," she said. "Since the films are made of edible plant parts, they can be consumed as part of the salad."

"At the field level, we want to look at various production practices as well as environmental factors affecting the quality and safety of leafy greens," she added. "We will study organic fertilizers, mainly compost teas, and see how the microbes survive in them."

Those studies will involve growing organic leafy greens on an experimental parcel and fertilizing them with compost teas inoculated with harmless strains of E. coli. The benefits of compost teas and organic nutrients on plant growth will also be evaluated, through Jorge Fonseca at the Yuma Agriculture Center, part of the UA's College of Agriculture and Life Sciences.

In collaboration with Kelly Bright and Charles Gerba in the UA's department of soil, water and environmental science, the team plans to monitor irrigation water by sampling water from different areas in Arizona for contamination with E. coli O157:H7, Salmonella and viruses at different times of the year.

"In addition to taking seasonal samples, we are going to sample right after a rainfall to see whether that affects the contamination risk," she said. "If it turns out that rainfall is causing a hazard, then we'll advise farmers to not irrigate fields or harvest after rain."

"Some researchers say the bacteria are only on the surface and there is no way for them to get inside the fruit," Ravishankar said. "Others say they can. We are going to study how the microbes attach to the plants and whether they get inside. Limited research has been done with regard to these issues in organically grown leafy greens. We hope to be able to find an answer."

Vegetable surfaces are not the only areas that could breed foodborne bacteria. Contaminated harvesting tools are likely to spread bacteria further.

"Commonly, the growers sanitize the harvesting tool but then use it for harvesting numerous lettuce heads before they sanitize it again," Ravishankar said. "All it takes is one bad apple in the row for the harvester to spread the microbes to other plants."

"We will artificially inoculate tools used for harvesting and for coring lettuce with harmless strains of E. coli and put them to the test: How many lettuce heads can they contaminate along the way?"

How effective is washing at removing bacteria from produce? The researchers will take a closer look at that, too. "We will be looking at about a dozen plant extracts, essential oils and organic sanitizers for their effectiveness against bacteria as well as viruses," Ravishankar said. "The most effective ones can potentially be applied in the rinse water used for washing leafy greens after harvest."

To ensure that the recommendations are economically viable, the grant includes commercial scale validation of the results. The team plans to assess the efficacy of the most effective organic sanitizers, plant extracts and essential oils by applying them in the flume washers used to clean the harvested produce in Yuma, Ariz.

Organic leafy greens treated with the most effective organic sanitizers, plant extracts, essential oils as well as antimicrobial edible films will be evaluated for their sensory acceptability using a panel of consumers.

"We will communicate our results through workshops for people in the industry to make it easy for them to adopt safe practices," Ravishankar added. "There will be training workshops, field days, presentations to extension agents and media outreach to raise public awareness." Kurt Nolte, director of Yuma County Extension, will be responsible for this effort.

This grant includes collaborations with scientists from the Southern University Agricultural Research and Extension Center in Baton Rouge, La., the USDA-ARS-Food Safety Laboratory in Beltsville, Md., and the USDA-ARS-Western Regional Research Center in Albany, Calif.

USDA's National Institute for Food and Agriculture awarded this grant through the Organic Agriculture Research and Extension Initiative.

Funder
US Department of Agriculture 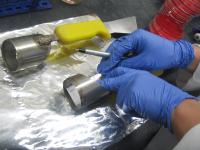