In the 1870s, the world's last truly wild horses, known as Przewalski's horses, lived in the Asian steppes of Mongolia and China. But by the 1960s, those wild horses were no longer free. Only one captive population remained, descended from about a dozen wild-caught individuals and perhaps four domesticated horses. Thanks to major conservation efforts, the current population of Przewalski's horses numbers over 2,000 individuals, with about a quarter living in reintroduction reserves.

Now, researchers reporting in the Cell Press journal Current Biology on September 24 have sequenced the complete genomes of eleven Przewalski's horses, including all of the founding lineages and five historical, museum specimens dating back more than a century, and compared them to the genomes of 28 domesticated horses to provide a detailed look at the endangered animals, both past and present.

"The novelty of our approach is to have not only surveyed the present-day genomic diversity of Przewalski's horses, but also to monitor their past genomic diversity, leveraging on museum specimens," says Ludovic Orlando of the University of Copenhagen's Natural History Museum of Denmark. "That way we could assess the genetic impact of more than 100 years of captivity in what used to be a critically endangered animal."

The genomic evidence helps to solve a long-standing debate in horse evolution, regarding the relationships between wild and domestic horses. The ancestors of Przewalski's horses and domesticated horses remained connected by gene flow for a long time after their divergence, some 45,000 years ago, the researchers report. Their populations continued to mix even after humans started to domesticate the horse about 5,500 years ago.

"As a matter of fact, we also show that very early in captivity--in the early 1900s--domestic horses contributed significantly to some lineages of the Przewalski's horse pedigree," Orlando says. "It implies that not all of the surviving Przewalski's lineages represent the gene pool of wild horses equally."

The findings also show that the last 110 years of captivity have left a mark on the Przewalski's horses, in the form of lower genetic diversity, increased inbreeding, and, in some cases, the significant introduction of genes from domesticated individuals. In the most extreme cases, about a quarter of the genomes of Przewalski's horses consisted of gene variants inherited from domesticated horses.

But there is some good news: "Even though Przewalski's horses went through an extreme demographic collapse, the population seems to recover, and is still genetically diverse," Orlando says. "There is, thus, hope for [other] endangered populations, fighting similar demographic issues."

The findings also serve as evidence of the importance of ancient DNA evidence in understanding domestication. The researchers say they plan to screen many more ancient horses--both wild and domestic--over time, with the goal of reconstructing the history of horses' 5,500 years of domestication.

After 100 years in captivity, a look at the world's last truly wild horses 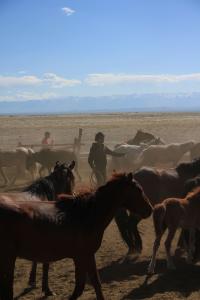