DURHAM, N.C. -- As scientists work toward making genetically altered bacteria create living "circuits" to produce a myriad of useful proteins and chemicals, they have logically assumed that the single-celled organisms would always respond to an external command in the same way.

Alas, some bacteria apparently have an individualistic streak that makes them zig when the others zag.

A new set of experiments by Duke University bioengineers has uncovered the existence of "bistability," in which an individual cell has the potential to live in either of two states, depending on which state it was in when stimulated.

Taking into account the effects of this phenomenon should greatly enhance the future efficiency of synthetic circuits, said biomedical engineer Lingchong You of Duke's Pratt School of Engineering and the Duke Institute for Genome Sciences & Policy.

In principle, re-programmed bacteria in a synthetic circuit can be useful for producing proteins, enzymes or chemicals in a coordinated way, or even delivering different types of drugs or selectively killing cancer cells, the scientists said.

Researchers in this new field of synthetic biology "program" populations of genetically altered bacteria to direct their actions in much the same way that a computer program directs a computer. In this analogy, the genetic alteration is the software, the cell the computer. The Duke researchers found that not only does the software drive the computer's actions, but the computer in turn influences the running of the software.

"In the past, synthetic biologists have often assumed that the components of the circuit would act in a predictable fashion every time and that the cells carrying the circuit would just serve as a passive reactor," You said. "In essence, they have taken a circuit-centric view for the design and optimization process. This notion is helpful in making the design process more convenient."

But it's not that simple, say You and his graduate student Cheemeng Tan, who published the results of their latest experiments early online in the journal Nature Chemical Biology.

"We found that there can be unintended consequences that haven't been appreciated before," said You. "In a population of identical cells, some can act one way while others act in another. However, this process appears to occur in a predictable manner, which allows us to take into account this effect when we design circuits."

Bistability is not unique to biology. In electrical engineering, for example, bistability describes the functioning of a toggle switch, a hinged switch that can assume either one of two positions – on or off.

"The prevailing wisdom underestimated the complexity of these synthetic circuits by assuming that the genetic changes would not affect the operation of the cell itself, as if the cell were a passive chassis," said Tan. "The expression of the genetic alteration can drastically impact the cell, and therefore the circuit.

"We now know that when the circuit is activated, it affects the cell, which in turn acts as an additional feedback loop influencing the circuit," Tan said. "The consequences of this interplay have been theorized but not demonstrated experimentally."

"It is as if the colony received the command not to expand too fast when the circuit is on," Tan explained. "Now that we know that this occurs, we used computer modeling to predict how many of the cells will go to the 'on' or 'off' state, which turns out to be consistent with experimental measurements"

The experiments were supported by the National Science Foundation, the National Institutes of Health and a David and Lucille Packard Fellowship. Duke's Philippe Marguet was also a member of the research team. 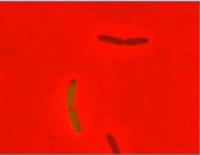