Many animal species use social information - from conspecifics or other species - to inform their behavioral choices, for example where to look for food or build a nest. In a recent study, ornithologists have shown for the first time that the ability to use such information can depend on an individual's cognitive skills. In the collared flycatcher, females that mastered a learning task faster were more likely to copy the nest site choices of great and blue tits in the same area.

"Our results are exciting because they show for the first time that differences in cognitive abilities between wild-living individuals has consequences for their ability to learn about their habitat and adapt to environmental changes," says Dr Laure Cauchard, a postdoctoral fellow in the School of Biological Sciences at the University of Aberdeen, Scotland, and one of the two lead authors of the study.

Cauchard and colleagues studied nest site choices in the collared flycatcher Ficedula albicollis on Gotland, a northern population isolated from the main population in southeastern Europe. Every year around the middle of August, collared flycatchers migrate due south across the Mediterranean and Sahara to overwinter in southern Africa. They return to Gotland in early April when oak leaves begin to unfold, food for the caterpillars that are the flycatchers' prey. Great and blue tits reside around Gotland year-round and begin their nests several weeks before the flycatchers' return. Previous studies have shown that flycatchers tend to copy the nest site choices of tits, presumably because these reflect the distribution of prey within the habitat.

In an ingenious experiment, the authors first tricked the flycatchers into adopting a spurious behavioral rule of neighboring tits: namely, to only choose nestboxes with a particular geometric symbol. Every spring between 2012 and 2015, the researchers placed an excess of nestboxes - 29 to 106 per forest patch, suitable for both tits and flycatchers - in 12 to 17 (depending on year) different forest patches on Gotland. At the start, either a white circle or triangle was placed at random on each empty nestbox. The tits had no preference for either symbol, which was unrelated to habitat quality. But as soon as a pair of tits nested in a box, the researchers swapped the symbol for its alternative if necessary, so that every nestbox occupied by tits ultimately came to carry the same symbol. As expected from previous research, on their return the flycatchers tended to copy the tits' apparent (but spurious) nest site preference when they chose their own nestbox. The researchers removed the symbol from every box occupied by flycatchers, to ensure that flycatchers copied only the nest site choices of the tits, and not those of other flycatchers.

When the chicks inside a flycatcher nestbox were six days old - that is, when their need for feeding was at its peak - the authors set a problem-solving task for the parents. The nestbox entrance was closed with a door mechanism, beneath which were three perches. The door only opened whenever a parent bringing food sat on the correct perch. Each bird received a learning score, depending on the number of trials before they had mastered the mechanism.

The learning score did not depend on a flycatcher's sex or estimated age. Slow learners scored consistently worse throughout: not only did they need more trips and an overall longer training period to learn to open the mechanism, but they also made more unsuccessful "guesses" (that is, they sat on the wrong perch more often) per trip. But the most interesting result was the relationship between learning score and the likelihood of copying the tits' apparent nest site preference: the worse the learning score of an individual female flycatcher in a pair, the lower the likelihood that the pair had chosen a nestbox with the symbol typical for nestboxes occupied by tits in the same forest patch. This effect was stronger for young female flycatchers than for older females, and absent in male flycatchers.

The researchers conclude that female flycatchers that learn faster are more likely to copy social behavior from other species. But do the results mean that the slowest learners were less intelligent? Not necessarily, caution the authors.

"We should not look on the slow learners as less intelligent, since the slowest learners still used information from tits to make a decision, in this case to reject rather than copy the tits' apparent preference," says Cauchard. "It may be that slow learners processed the social information differently and made their choice based on costs and benefits that we did not quantify here."

The authors plan to replicate their study in other species to see if results are similar. "By repeating these experiments across species that differ in the environmental and social pressures they face, we can unravel the mechanisms that link cognitive abilities and decision-making." 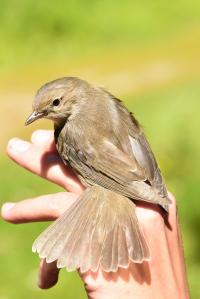 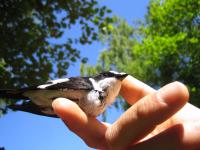