Researchers at the University of Hawaii medical school have successfully developed a vaccine candidate for the Zika virus, showing that it is effective in protecting both mice and monkeys from the infection.

Demonstrating the effectiveness of their vaccine candidate in monkeys (non-human primates) is an important milestone because it typically predicts the vaccine will work in humans, enabling further clinical development.

A strong global initiative to battle Zika has produced more than 30 vaccine candidates since outbreaks in 2015-2016 in Brazil linked the infection in some pregnant women to severe birth defects in their newborns. Zika is spread by the bite of infected mosquitos and through sex.

There is no treatment or cure for Zika virus infection nor is any vaccine currently approved for public use.

The proposed vaccine reported by scientists at the John A. Burns School of Medicine (JABSOM) in the journals Frontiers in Immunology and mSphere, via the open access journal of the American Society for Microbiology, is a recombinant subunit vaccine that uses only a small part (protein) of the Zika virus, produced in insect cells.

"We believe our vaccine candidate shows much promise particularly as it showed to require only two immunizations given three weeks apart and is a potentially safer alternative to other candidates already in clinical trials," said Dr. Axel Lehrer, JABSOM Assistant Professor of Tropical Medicine and Infectious Disease. Lehrer thinks the vaccine his team proposes might be safer that other candidate vaccines, especially keeping in mind that pregnant women constitute a significant part of the target population for a Zika vaccine.

The research team at JABSOM included two senior graduate students who served as lead authors of the scientific research papers. Liana Medina, whose early training was directly supported by a National Institutes of Health Diversity in Health-Related Research grant, and Honolulu native Albert To are the graduate student lead authors.

Honolulu-based Hawaii Biotech is a key partner in the vaccine development project with UH.

Two of their scientists, Dr. Jaime Horton and David Clements, contributed to the most recent publication demonstrating vaccine efficacy in monkeys, along with collaborators from Bioqual Inc. of Rockville, Maryland, and the Department of Diagnostic Medicine/Pathobiology, Biosecurity Research Institute, College of Veterinary Medicine, at Kansas State University.

"The intense search for a Zika remedy since early 2016 has required us to be agile, and we believe our vaccine candidate research demonstrates that such quick-turnaround results can be achieved in academic and scientific partnerships here in Hawaii," said Dr. Lehrer. "It is incredibly gratifying that two of the scientists we are training to be the future of biomedical science played key roles in gathering, analyzing and reporting their conclusions. We hope Hawaii's citizens find that as inspiring as we do."

Graduate student scientist and research co-author Liana Medina said there were chances to develop new skills at every step along the way. "Having the opportunity to see the vaccine's development from its very first stages as Zika E protein being produced by Dr. Kenji Obadia, at the time also a student in our department, to a vaccine that is efficacious and safe in animal models was a unique learning experience. Being a part of the process allowed me grow as a student in this field," said Medina.

Fellow graduate student and co-author Albert To said the team's results "put us on the world-stage and highlight the talent we have here in Hawaii." He said, "Being involved with this project has given me a glimpse of the type of research and results needed to progress an idea to a potential preventative therapy used by thousands of people worldwide."

JABSOM scientists continue to work to understand the immune responses to the vaccine. They are collaborating with the UH Kapiolani Community College in an effort to create antibodies that can be used as treatments or for improved diagnostic tests for Zika virus. Other Zika-related research at JABSOM also focuses on understanding how Zika can hide undetected in the sex organs of men for an extended period.

Funding for the most recent research for the vaccine project was provided in part by Pacific Center for Emerging Infectious Diseases Research (COBRE grant P30GM114737), by the National Institute of General Medical Sciences (NIGMS), NIH/NIAID grant 1R01AI119185, and institutional startup funds.

Video broll and hi-resolution jpegs may be downloaded from https://spaces.hightail.com/space/poMgvoyjDG 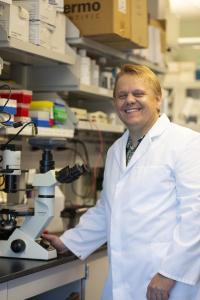