With a new $5.8 million, three-year award from the National Institutes of Health (NIH), researchers at the University of Pittsburgh School of Medicine will further develop a state-of-the-art, microfluidic 3D model system that mimics structure and function of the liver to better predict organ physiology, assess drug toxicity and build disease models.

The funding supports the next phase of the NIH's Tissue Chip for Drug Screening program, which aims to improve ways of predicting drug safety and effectiveness. Researchers from 11 institutions will collaborate over three years to refine existing 3-D human tissue chips and combine them into an integrated system that can mimic the complex functions of the human body.

"The development of tissue chips is a remarkable marriage of biology and engineering, and has the potential to transform preclinical testing of candidate treatments, providing valuable tools for biomedical research," said NIH Director Francis S. Collins, M.D., Ph.D.

With such a platform, biomedical scientists will be able to test treatment efficacy in conditions such as non-alcoholic fatty liver disease, liver cancer and breast cancer that has spread to the liver, as well as liver damage including immune-mediated toxicology and fibrosis. Also, a team of institutions and investigators has been assembled to integrate the liver, kidney and gut models to recapitulate the organ system that is central to drug absorption and metabolism.

The integrated platform will involve the creation of a universal medium, the development of the proper "scaling" of the interacting organ constructs, physiologically relevant flow, incorporation of a micro-formulator to add factors from missing organs and micro-analyzers for monitoring parameters such as pH and oxygen. 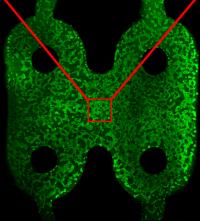