CHICAGO--A strikingly unusual animal was recently discovered in the cloud-forests of Peru. The large rodent is about the size of a squirrel and looks a bit like one, except its closest relatives are spiny rats.

The nocturnal, climbing rodent is beautiful yet strange looking, with long dense fur, a broad blocky head, and thickly furred tail. A blackish crest of fur on the crown, nape and shoulders add to its distinctive appearance.

Isothrix barbarabrownae, as the new species has been named, is described in the current issue of Mastozoología Neotropical (Neotropical mammalogy), the principal mammalogy journal of South America. A color illustration of the bushy rodent graces the cover of the journal. It and another color illustration of the new species are both available to the media.

The authors of the study found the rodent in 1999 while conducting field research in Peru's Manu National Park and Biosphere Reserve Mountains in Southern Peru along the eastern slope of the Andes. Extending from lowland tropical forests in the Amazon Basin to open grasslands above the Andean tree line, Manu is home to more species of mammals and birds than any equivalently sized area in the world.

"Like other tropical mountain ranges, such as the Himalayas, Ruwenzoris, Virungas and Kinabalu, the Andes support a fantastic variety of habitats," said Bruce Patterson, MacArthur Curator of Mammals at The Field Museum. "These in turn support some of the richest faunas on the planet."

The new rodent was discovered at an altitude of 6,200 feet. Little is known about its lifestyle because subsequent efforts to locate and observe the animal were fruitless.

I. barbarabrownae belongs to a family of rodents known as "spiny rats" because most of the species in that family bristle with spines. Its discovery has necessitated a re-examination of this tropical American family, especially its closest relatives, the bush-tailed tree rats found in South America's lowlands. As a result of the recent discovery, the authors have used The Field Museum's Pritzker Lab for Molecular Systematics and Evolution to resolve the evolutionary relationships among all of these rodents.

"The new species is not only a handsome novelty," Patterson said. "Preliminary DNA analyses suggest that its nearest relatives, all restricted to the lowlands, may have arisen from Andean ancestors. The newly discovered species casts a striking new light on the evolution of an entire group of arboreal rodents."

Paul Velazco, the other author of this paper, is a PhD student at the University of Illinois at Chicago and student-in-residence at The Field Museum. The new species is named after Barbara E. Brown, who has worked at The Field Museum since 1970.

The work of the international field research team that found I. barbarabrownae stretched over three seasons (1999-2001) and resulted in the discovery of 11 additional species new to science in a single river valley: 1 opossum, 7 bats, and 3 rodents. In November 2006, a synopsis of the entire project was published in Fieldiana: Zoology, a scientific publication of The Field Museum. The article is called "Mammals and Birds of the Manu Biosphere Reserve, Peru." It lists 222 species of mammals, 94 of which are bats, and 1,005 species of birds, twice the number of bird species breeding in the United States and Canada combined.

"Students from San Marcos University in Lima made up two-thirds of the team collecting mammals, birds, and their parasites," Patterson said. "Peruvian students have described most of the new species while pursuing graduate studies overseas. Manu trainees are now enrolled in universities in Illinois, Texas, Michigan, Mexico and the United Kingdom." The research was sponsored by the National Science Foundation, the Museo de Historia Natural at the Universidad Nacional Mayor de San Marcos in Lima, and The Field Museum.

Isothrix barbarabrownae is named and described in the current issue of Mastozoología Neotropical (Neotropical mammalogy), the principal mammalogy journal of South America. This illustration graces the cover of that journal. The authors of the study found the rodent in 1999 while conducting field research in Peru's Manu National Park and Biosphere Reserve along the eastern slope of the Andes Mountains in Southern Peru. Extending from lowland tropical forests in the Amazon Basin to open grasslands above the Andean tree line, the Manu is home to more species of mammals and birds than any equivalently sized area in the world.
Illustration by Velizar Simeonovski, Courtesy of The Field Museum

This illustration depicts Isothrix barbarabrownae, a newly discovered species of Neotropical rodent, in its arboreal habitat. The strikingly unusual animal has long dense fur, a broad blocky head, thickly furred tail, and a blackish crest of fur on the crown, nape and shoulders. It is about the size of a squirrel.
Illustration by Nancy Halliday, Courtesy of The Field Museum 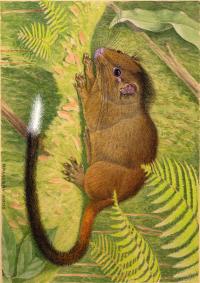