How much electricity flows through the grid? When and where? Where are the bottlenecks? What happens when wind turbines and solar cells feed in additional energy? The answer to these questions are essential for the global energy turnaround. However, for a valid planning, one first needs a solid understanding of the infrastructure. Researchers at the Technical University of Munich (TUM) are now collecting information via an open source platform accessible to everyone.

Hundreds of volunteers are already underway, and their numbers are growing every day. Armed with the OpenGridMap app on their smart phones, they meander through Munich, Berlin, Tokyo and even Teheran. Just another cell phone game? "No, we aren't chasing Pokémons," reassures Jose Rivera, director of the OpenGridMap project. "What we are interested in is the electrical infrastructure: High-voltage and low-voltage power lines, transformer sub-stations, wind turbines and solar power plants."

Users of the app share photos and locations with a server housed in the Department of Computer Science at TU Munich. There, the information is analyzed, evaluated and ultimately loaded into the open source OpenStreetMap map system.

The goal is a map of electric power grids worldwide. "This is a prerequisite for the energy turnaround - not only here in Germany, but in all countries around the world. You can only plan the restructuring of the energy supply if you know exactly where powerlines are located and at which locations power from high-voltage lines is transformed and fed into the low-voltage networks," explains Prof. Hans-Arno Jacobsen, director of the Department of Energy Informatics and Middleware at TUM.

Building on this foundation, it is possible, for example, to simulate how feeding in renewable energy will affect the grid and where bottlenecks or surplus capacity will arise and where it might make sense to build storage facilities.

What is lacking thus far is a solid pool of data, says Rivera: "Of course every power utility knows its own grids, but there are many power companies but very few open their data to the public. This is compounded in emerging markets by the fact that the information is frequently not even digitized. Contracting a company to compile the infrastructure for an entire country, or even the entire world would not be affordable for the researchers."

The cost-effective alternative: crowd sourcing. The TU Munich team did not have to start at zero: A community of volunteers has been collecting data for the Wiki global map OpenStreetMap for over 10 years. This publicly accessible data set also contains information on electric power grids. "However, it they are neither complete nor verified," explains Rivera. "And that is precisely what we are now hoping to change:"

Half a year ago the researcher from the Department of Energy Informatics and Middleware published his OpenGridMap app on the Google Playstore. Since then he has been looking for volunteers to map wind turbines, solar power plants, transformer sub-stations and power lines using their mobile phones.

The denser the mesh of mapped points, the more information can be generated. In Garching, for example, where a particularly large number of volunteers are active, the researcher has successfully calculated the location of subterranean power lines leading to houses using a novel algorithm.

The idea is to make data from the project available to engineers and scientists around the world. "There are many potential applications for the OpenGridMap," Professor Jacobsen emphasizes. "You could investigate the feasibility of making a state like Bavaria energy autonomous." And someone attempting to improve the infrastructure a developing or emerging country could easily recognize how far a given town is removed from the nearest powerline.

It is no wonder that there is great interest in the OpenGridMap project: Siemens is a project mentor and the World Bank also supports the undertaking. The project receives further funding from the German Federal Ministry for Education and Research (BMBF) and the Alexander Humboldt Foundation.

Infrastructure data for everyone 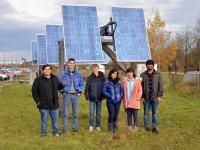