The water levels of the Caspian Sea will be 9 to 18 meters lower than they are now, German and Dutch researchers calculate. In the Nature-journal Communications Earth & Environment they urge the world to act.

Coastal nations are rightly worried about a sea level rise, but in the countries around the Caspian Sea over a hundred million people are facing the opposite problem: an enormous drop in sea level. Technically, this sea is a land-locked lake, but it is the largest on the planet (371.000 km2), and quite salty.

The largest lake in the world is getting smaller every year, though. Since the 90's, the water level has been dropping a few centimeters every year. This drop will accelerate during the upcoming decades, scientists from the German universities of Gießen and Bremen calculated, together with Dutch geologist Frank Wesselingh.

"If the North Sea would drop two or three meters, access to ports like Rotterdam, Hamburg and London would be impeded. Fishing boats and container giants alike would struggle, and all the countries on the North Sea would have a huge problem", Wesselingh says. "Here, we are talking about a decrease of no less than nine meters - in the best case scenario." In the worst case scenario, the drop will be eighteen meters, and the Caspian Sea will lose over a third of its surface area.

In the journal Communications Earth & Environment, the three scientists are calling for action. Increased evaporation and the loss of sea ice in the winter will accelerate water level drop, they explain. This will affect the unique ecosystems in the area, with their migratory birds, beluga and the endemic Caspian seal, that raises its puppies on the sea ice in the North of the Caspian Sea. It will also have dire consequences for the millions of people living near the sea, or around the rivers that run into it.

These problems also play in a region that is already politically tense. Azerbaijan, Russia, Iran, Turkmenistan and Kazakhstan all share a piece of the Caspian Sea, and would have to make new agreements on borders and fishing rights. Wesselingh and his German colleagues urge the formation of an international task force, led by the United Nations Environmental Programme, that would coordinate the mitigation of this problem.

"This aspect of climate change - falling levels of lakes -could be similarly devastating as global sea level rise", the three researchers write in their article. "Immediate and coordinated action is required to make up for valuable time lost. The shrinking Caspian Sea might serve as a poster child of the problem, and will help to galvanize such actions." 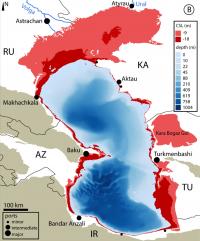