Tropical Cyclone Guito has been a powerful rainmaker, and fortunately, data from NASA's TRMM satellite shows that the heaviest rainfall has occurred over the open waters of the Mozambique Channel and not over land.

The Tropical Rainfall Measuring Mission or TRMM satellite had a look at tropical cyclone Guito in the Mozambique Channel on February 18, 2014 at 1525 UTC/10:25 a.m. EST. The early evening (local time) view occurred only about three hours after Guito attained tropical storm intensity of 35 knots/40 mph/62 kph).

TRMM's Microwave Imager (TMI) had better coverage of Guito than the Precipitation Radar (PR) instrument whose swath was well to the south of the tropical cyclone's center of circulation. TRMM TMI revealed that Guito was producing rain at a rate of over 50mm/~ 2 inches per hour in the center of the Mozambique Channel and scattered light rain on Madagascar's western coast.

At NASA's Goddard Space Flight Center in Greenbelt, Md. a rainfall anomaly analysis was made by comparing rainfall data compiled during the twelve year period from 2001-2012 to "near real-time" Multi-satellite Precipitation Analysis data collected for the same period. That analysis showed that rainfall in the northern Mozambique Channel has been above normal for the past month.

These rainfall estimates were used to create a simulated 3-D perspective view with higher precipitation amounts appearing to be taller than lower amounts. The highest totals, with amounts in the Mozambique Channel greater than 430 mm/~16.9 inches.

On Feb. 20 at 0800 UTC/3:00 a.m. EST, the Moderate Resolution Imaging Spectroradiometer or MODIS instrument that flies aboard NASA's Terra satellite showed that Cyclone Guito had moved farther south in the Mozambique Channel that the previous day. The MODIS image also showed that Guito's western fringes were brushing over Mozambique. In addition, multispectral satellite imagery showed that the strong convection associated with the low-level center of circulation had decreased.

Guito is heading southeast and out of the Mozambique Channel and into the open waters of the Southern Indian Ocean. The Joint Typhoon Warning Center or JTWC noted that after 24 hours (by February 21 at 0900 UTC/4:00 a.m. EST), cooler sea surface temperatures and increasing vertical wind shear will take a toll on the tropical cyclone and start to weaken it.

JTWC forecasters expect by the second day that Guito will being transitioning into an extra-tropical storm, a process that will take another day over the open waters of the Southern Indian Ocean. 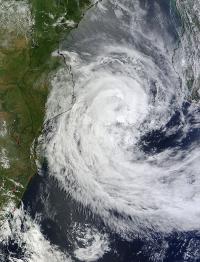