A small Bolivian society of indigenous forager-farmers, known for astonishingly healthy cardiovascular systems, is seeing a split in beliefs about what makes a good life. Some are holding more to the traditional -- more family ties, hunting and knowledge of forest medicine -- but others are starting to favor material wealth, a Baylor University study finds.

The timing of the divided beliefs among the Tsimane' people coincides with a shifting, more market-driven lifestyle over the past decade. That includes new forms of livelihood, rapid nutrition transition and increasing overweight and obesity, said study author Alan F. Schultz, Ph.D., M.P.H., assistant professor of anthropology at Baylor University.

"For the Tsimane', lifestyle may be at the heart of health," he said. "Considering the changes underway, studying the role of culture and social life for the maintenance of health in this group matters more now than ever."

In his study, published in the journal PLOS ONE, Schultz spent more than a year collecting ethnographic and mixed-methods data in Bolivian Amazonia to understand the social and cultural lives of this heart-healthy group.

The Tsimane' are in the early stages of market integration with limited participation in the regional market economy. One of the most isolated of 36 Bolivian indigenous groups, their population has grown rapidly, from an estimated 6,000 people in the late 1990s to about 16,000 in 2015, according to national censuses. Their livelihood has stayed almost entirely subsistence-based, but as migrants and ranchers have moved into the area, Tsimane' have more opportunities to make occasional income from contract and day labor. That money is spent on things like medical care and tools but also on processed foods.

Market integration is not limited to purchasing market items but extends to most other aspects of lifestyle, such as entertainment (listening to outside music over traditional flute music); health care (using biomedicine vs. forest medicine); and seeking out Western education, rather than staying in one's birth community.

He interviewed 101 individuals ages 15 to 75 in their native language (about one quarter of the qualified population in the two communities), first collecting lists of everything needed for "the good life" in each community, then merging these and getting participants to rate which items mattered most to them.

In the study, three dimensions proved key to understanding Tsimane' differences in beliefs about lifestyle: gender; traditional versus market-based items; and the types of wealth that respondents deemed necessary for a good life.

Schultz noted that even seemingly minor changes in lifestyle regarding types of wealth valued could lead quickly to disparities in material wealth and health in mostly egalitarian groups like the Tsimane'. An example is learning enough Spanish to sign a work contract or find wage labor.

"With the money earned, you can buy a small, inexpensive outboard canoe motor, making it easier to take part in more market activities and buy more processed foods," Schultz said.

The study benefits from a depth of investigation not always possible in other health and social surveys, Schultz said. While the Tsimane' are one of the most intensively surveyed small-scale societies of the past two decades -- with more than 400 peer-reviewed articles published during that time -- most are focused on large sample sizes and universal measures, rather than insider perspectives from the Tsimane.'

This new research considers Tsimane' worldview, revealing a greater complexity not possible in surveys alone, Schultz said. His future research will build on that foundation.

"Can the Tsimane' maintain their health if their lifestyle ideals change too much?" he said. "And does their lifestyle provide clues for how to lower cardiovascular disease risk, the leading cause of death worldwide?"

*Financial support for the study was provided by a National Science Foundation grant. 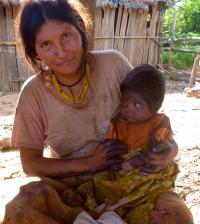