If you asked paleontologists what the earliest ancestors of dinosaurs were like, most would put their money on the animals resembling miniature dinosaurs: small, meat-eating animals that walked on two legs. But in a paper published in Nature scientists describe the earliest known dinosaur relative: a six-foot-long lizard-like carnivore called Teleocrater rhadinus.

"Teleocrater has unexpectedly crocodile-like features that are causing us to completely reassess what we thought about the earliest stages of dinosaur evolution," says Ken Angielczyk, The Field Museum's associate curator of fossil mammals and one of the paper's authors. "Surprisingly, early dinosaur relatives were pretty profoundly not dinosaur-like."

All dinosaurs are archosaurs--a group that contains dinos, birds, pterosaurs ("flying reptiles"), and crocodilians. About 250 million years ago, the archosaurs split into two groups: a bird-like group that evolved into dinosaurs, birds, and pterosaurs, and a crocodile-like group that includes the alligators and crocs alive today and a diversity of now-extinct relatives. The newly-discovered Teleocrater rhadinus is the earliest member of the bird-like side of the family. It's not a direct ancestor of dinosaurs, the authors say, but it's the oldest known dinosaur cousin.

But Teleocrater didn't look much like a dinosaur. In appearance, Teleocrater probably resembled the monitor lizards alive today. It was between six and ten feet long, including its long neck and longer tail, and it probably weighed between twenty and sixty-five pounds. It likely stood around two feet tall at the hip. And while some of its features, like the jaw muscle attachments at the back of its skull, clearly put it in the bird-like archosaur camp with the dinos, it has a lot in common with its more distant crocodilian cousins. Most notably, its ankle joints could rotate from side to side as well as flexing up and down, while dinosaurs' and birds' ankle joints could only do a hinge-like up-and-down motion. That would have given Teleocrater a more splayed, crocodile-like gait rather than an ostrich-like trot.

The fact that Teleocrater has lots of features in common with crocodilians gives us a new picture about how dinosaur-like features evolved. "We used to think that many of the distinctive features of bird-line archosaurs evolved very quickly after they diverged from the crocodile line because early bird-line archosaurs like Marasuchus, Dromoeron, and Lagerpeton were small and very dinosaur-like," explains Angielczyk. "However, Teleocrater shows us that bird-line archosaurs initially inherited many crocodile-like features from the common ancestor of all archosaurs, and that the 'typical' bird-line features evolved in a step-wise fashion over a longer period of time. Scientists generally don't love the term 'missing link,' but that's kind of what Teleocrater is: a missing link between dinosaurs and the common ancestor they share with crocodiles."

Just as Teleocrater fills in a gap in the fossil history, its official description in this paper represents the missing piece of a long academic investigation. "While Teleocrater is being formally named for the first time in this paper, it was first identified by a British paleontologist named Alan Charig in the 1950s, using fossils that were collected in the 1930s," says Angielczyk. "In his thesis, Charig informally identified fossils of an early lizard-like animal that he called Teleocrater, but the understanding of dinosaur evolution at the time was such that he didn't recognize the connection with dinosaurs." So Teleocrater remained largely a mystery until Angielczyk and his colleagues discovered more specimens on a recent dig in Tanzania.

"We found fossils that we thought might be from Teleocrater, but it wasn't until we were back in the lab that we realized we'd found something really amazing," says Angielczyk. The team's paper officially gave the animal Charig's name, Teleocrater rhadinus, meaning "slender complete basin," a reference to the animal's lean build and closed hip socket.

"The discovery of such an important new species is a once-in-a-lifetime discovery," says Sterling Nesbitt of Virginia Polytechnic Institute and State University, the paper's lead author. "Teleocrater fundamentally changes our ideas about the earliest history of dinosaur relatives." 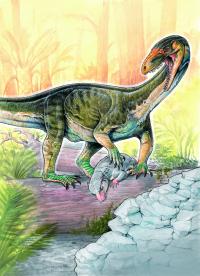