Millions of people in China depend on the rainfall brought by the monsoon during summer for their livelihoods and water supplies. Although there have been recent studies demonstrating that monsoon rainfall over the summer as a whole can be predicted, skilful predictions on shorter time scales have not yet been demonstrated. A recent study, published in Advances in Atmospheric Sciences, suggests that such predictions may now be possible.

"Our analysis shows that we can use our seasonal forecasting system to predict whether the rainfall in June over the middle and lower Yangtze River Basin as a whole is likely to be more, or less, than average," said Gill Martin, a senior researcher at the Met Office, UK, and the study's lead author, "and we may be able to provide reliable predictions up to four months ahead, i.e. from February onwards."

Much of the rainfall in this region during June is contributed by the mei-yu rain band, a "stationary phase" of the seasonal progression of the East Asian Summer Monsoon (EASM) that is present in the middle and lower Yangtze River Basin between the second week of June and early July. Variations in mei-yu rainfall are linked to a large-scale atmospheric circulation pattern over the Western North Pacific, whose position and strength determine the south-westerly monsoon flow over southern China in early summer.

Previous studies have shown that El Niño-Southern Oscillation (ENSO), the dominant mode of variability in the tropical Pacific, is one of the most important factors affecting the EASM. Sea surface temperature (SST) changes associated with El Niño in the tropical Pacific during the previous winter contribute to altering the atmospheric circulation over Eurasia and the Western Pacific in such a way as to increase the EASM rainfall in early summer. The new study shows that the Met Office's seasonal forecasting system represents this relationship, and that this is the main source of skilful rainfall prediction for June in the middle/lower Yangtze River Basin.

"The ability to predict the June rainfall in the middle and lower Yangtze River Basin up to four months in advance offers exciting possibilities for providing useful, early information to contingency planners on the availability of water during the summer season", says Dr Martin. "We would encourage other forecasting centers to investigate the skill for predicting June rainfall in their operational forecasting systems." 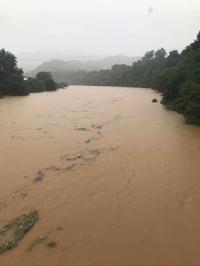