Freshwater fish are a highly diverse group, representing nearly half of all fish species. Due to accelerating human activities, they are also the most threatened vertebrate group, and are disappearing faster than they can be described. Currently, half of all freshwater fish species are still not formally assessed by conservation organizations, such as the International Union for Conservation of Nature (IUCN), resulting in many species becoming extinct before conservation actions can even be initiated.

However, a newly published study by Dr. Jose Valdez from Aarhus University and Kapil Mandrekar from SUNY College of Environmental Science and Forestry, shows how aquarium hobbyists can play an important role in freshwater fish conservation by filling in the gaps left by the scientific community and conservation organizations.

Aquarium keeping is one of the most popular hobbies in the world, with millions of fish owners participating in this activity worldwide. Due to their interest in fish conservation and a love for the species they own, hobbyists often pay more attention to the conservation status of particular fish groups than the scientific community and can be more knowledgeable of some species than their professional counterparts.

"In some cases, species that are not yet scientifically described are well known to hobbyists - such as many species from the armoured catfish family," says Valdez.

Aquarium hobbyist organizations help bring these passionate enthusiasts together to exchange information on keeping and caring for specific groups of fishes. These hobbyist organizations, along with their dedicated members, have already helped discover new species while saving others from extinction by providing rare and extinct in the wild fish from their own aquariums towards various conservation projects.

This includes conservation projects such as the Fish Ark Project (FAP) and associated organizations such as the Goodeid Working Group (GWG), who successfully keep populations of the 12 most endangered or extinct-in-the-wild and 24 threatened goodeid species in Mexico. Others such as the Hobbyist Aqualab Conservation Project (HACP), has already provided specimens of rare fish species to 34 universities, public aquaria, zoos, and other hobbyists in 15 countries to ensure their survival.

The largest organization is the CARES (Conservation, Awareness, Recognition, Encouragement, and Support) preservation program, which is associated with some of the major aquarium hobbyist organizations. CARES has taken a grassroots initiative to encourage hobbyists to keep the most endangered, and in some cases, already extinct in the wild freshwater fish to ensure their continued survival.

"The importance of programs, such as CARES," says Mandrekar, "is that some of the species they focus on have little to no commercial value in the fish trade, and emphasize those that are overlooked and not charismatic enough for many conservation programs."

Although CARES was founded fifteen years ago, the study by Jose Valdez and Kapil Mandrekar was the first to assess the program's species and the potential value of CARES to the scientific community and conservation.

The researchers found that CARES listed nearly six hundred species of freshwater fish and over eighty species which are currently unknown by the scientific community.

"Aquarium hobbyists often possess detailed descriptions of undescribed species and the habitats where they are found, which can provide a detailed background for future work by the scientific community," explains Mandrekar.

The CARES list also contained over thirty species that they consider already extinct in the wild, even though more than a third of those were classified as not threatened by the IUCN.

Need for close partnership with scientists

The vast disconnect of information revealed by the study exemplifies the importance of programs such as CARES and the need for scientists and conservation organizations to not only develop closer partnerships with hobbyist organizations but also recognize them as a valuable resource that can help save freshwater fishes from extinction.

"Many species already extinct in the wild currently only exist because they are specifically being kept and bred by these hobbyists. By bridging these conservation and knowledge gaps, fish hobbyists from the comfort of their home, are playing a pivotal role in helping preserve many of these threatened and rare fishes for future generations," explains Valdez.

Although CARES involves individuals with scientific backgrounds, the authors state that there must be closer collaborations with scientists across disciplines as well as partnering with in-situ and ex-situ conservation efforts.

The hidden ark: How a grassroots initiative can help save fish from extinction 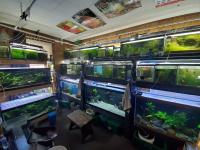