Scientists have discovered that the larynx, or voice box, of primates is significantly larger relative to body size, has greater variation, and is under faster rates of evolution than in other mammals.

Published in the journal PLOS Biology and led by academics from Anglia Ruskin University (ARU), Stanford University, and the University of Vienna, the research is the first large-scale study into the evolution of the larynx.

The larynx has three main functions: protecting the airway during feeding, regulating the supply of air to the lungs, and vocal communication. Because of its important role in facilitating social behaviour, through vocalisation, it has long been believed that the larynx is a key area of evolution, particularly in species with highly developed vocal communication systems.

The researchers made CT-scans of specimens from 55 different species, and produced 3D computer models of their larynges. These were studied alongside detailed measurements, including body length and body mass.

The study found that, for a given body length, primate larynges are on average 38% larger than those of carnivorans, and that the rate of larynx evolution is faster in these species.

There is also more variation in larynx size relative to body size among primates, indicating that primates have greater flexibility to evolve in different ways. Carnivorans follow more of a fixed larynx-size to body-size ratio.

Larynx size was also found to be a good predictor of the call frequency of a species, which demonstrates the relevance for vocal communication of the observed size variations.

Co-lead author Dr Jacob Dunn, Reader in Evolutionary Biology at Anglia Ruskin University (ARU), said: "This study demonstrates clear differences in the evolution of the larynx between groups of mammals.

"Specifically, we have shown for the first time that the primate larynx is larger, less closely linked to body size, and under faster rates of evolution than the carnivoran larynx, which is a well-matched comparison group, indicating fundamental differences in the evolution of the vocal organ across species."

Co-lead author Dr Daniel Bowling, Instructor in Psychiatry and Behavioral Sciences at Stanford University, added: "Our study also shows that differences in larynx size predict changes in voice pitch, highlighting the larynx's crucial role in vocal communication. This is demonstrated by the rich and varied calls produced by many primate species.

"The results imply fundamental differences between primates and carnivorans in the forces constraining larynx size, as well as highlighting an evolutionary flexibility in primates that may help explain why they have developed complex and diverse uses of the vocal organ for communication. This provides an exciting avenue for future studies examining variation among other mammalian groups." 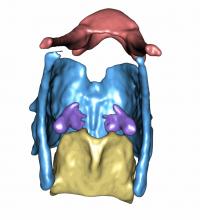 3D Image of a Gorilla Larynx 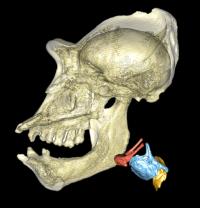