Hollywood celebrities spend large amounts of dollars on it. The hunky stud at the local pub thinks he knows it. But the age-old secret has been carefully kept for millions of years. Yet, it seemed obvious to pre-mammalian reptiles that went so far as to evolve mouths full of beautifully crafted teeth. It's your beautifully bleached smile that makes you sexy!

Mammals, like us, have a set of dentition that are neatly divided into three distinct types of teeth -- the incisors at the front of your mouth, the molars in your cheeks, and the canines, that Dracula-type teeth that separates the molars from the incisors. The origin of this separation can be traced back to 300 million years ago, when our ancestors still looked like sprawling reptiles, the pre-mammalian therapsids.

These creatures, like the gorgonopsians (a group of therapsids), had long, sometimes sabre-like canines that was often interpreted as a deadly hunting device. However, there was a problem. Some herbivorous species that only grazed on plants, like the dicynodonts (herbivorous animals, varying in sizes from a rat to an ox, and like warthogs, had two tusks, that gave them their name, which means "two dog tooth").

So, if not for hunting, what were these impressive sets of pointy teeth for? Defence against predators? Nope! These prehistoric characters used them to seduce the beauties!

Currently living species of sabre-toothed animals, such as the piscivorous walrus or the herbivorous deer-like muntiac, use their canines as a display apparatus, to seduce a mate, or to intimidate their kin. The large sabre-like canine therefore becomes a sexually selected trait.

However, the question now is whether sexual selection was an important phenomenon in mammalian ancestry?

In new research published in the journal, Plos One, the palaeontologists of the University of the Witwatersrand (Evolutionary Studies Institute (ESI) and School of Anatomical Sciences, Johannesburg, South Africa) and their colleagues from the European Synchrotron Radiation Facility (Grenoble, France), used CT and synchrotron radiation scanning to uncover this mystery.

By using X-ray computerised micro-tomographic (microCT) scanning on the mysterious fossil therapsid Choerosaurus dejageri (Therocephalia, Eutheriodontia), a "mammal-like reptile" that lived 259 million years ago and belong to the lineage that gave birth to mammals, the scientists revealed that the Choerosaurus evolved his very peculiar ornamented face under sexual pressure. "Choerosaurus is known by only one, delicate skull. It is unique since it is the only Eutheriodont to have two symmetrical bosses on its maxilla and mandible," says Dr Julien Benoit, a postdoctoral fellow at the ESI at Wits and lead author of the study. "In this research, we address the possibility that these cranial bosses were either for intra-specific combat or for sexual display".

The thorough CT scan survey revealed that these structures were not pathological, and comparisons with a synchrotron scan of the skull of the monstrous dinocephalian Moschops, also known as the head-butting therapsid, confirmed that the skull and cranial bosses of Choerosaurus were too weak for high energy combat. Additionally, the maxillary boss was richly innervated and highly vascular, which is not compatible for fighting but is more suitable for supporting a colourful and/or sensitive cornified pad, potentially involved in display behaviour.

"The cranial bosses of Choerosaurus are the first evidence of structures dedicated solely to intraspecific, sexual competition (either low energy fight and/or sexual display) in Eutheriodontia, the group directly ancestral to mammals," says Benoit. "Whereas few studies have investigated sexual dimorphism and competition in early therapsids, this fossil shows that sexual competition and the associated complex, ritualised behaviour were indeed an important component of therapsid evolution at the very root of the therapsid clade, as far back in the past as 300 million years, hundreds of millions of years before mammals or the more advanced dinosaurs expressed these behaviours."

Benoit says this finding expends the record of sexually selected traits in pre-mammalian therapsids and suggests that sexual selection may have played a more important role in the origin of mammals than previously thought.

"This reshape our understanding of our deep evolutionary root, particularly that of the canine which likely originated as a display organ." 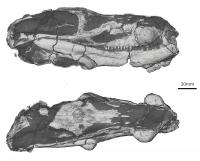