Over the course of one month, three researchers at Colorado State University raised more than 10,000 mosquitoes and dissected more than 2,000 of them, working some days with 500 insects.

That's what it took for the team -- in conjunction with scientists from Purdue University -- to map for the first time the midgut metabolites of the Aedes aegypti, the mosquito that can transmit viruses that cause dengue, Zika, chikungunya and yellow fever to humans.

Transmitting these viruses to people is not a given. First, the mosquito must become infected itself, then replicate and disseminate the virus from inside its body. The midgut is where the viruses infect the mosquito and are replicated; the team is studying what role metabolites play in the process.

Their findings have been published in "Dynamic remodeling of lipids coincides with dengue virus replication in the midgut of Aedes aegypti mosquitoes" in PLOS.

"Our aim was to identify what changes in a mosquito during infection, so that we can target those pathways and block them to prevent transmission of these mosquito-borne viruses," said Rushika Perera, assistant professor in the Department of Microbiology, Immunology, and Pathology at CSU.

Dengue, Zika, chikungunya and yellow fever viruses are endemic in tropical and subtropical regions of the world, placing 2.5 billion people at risk for infection. In 2015, following a Zika virus outbreak and related health issues -- including an observed increase in neurological disorders and neonatal malformations in Brazil -- World Health Organization officials declared the situation a Public Health Emergency of International Concern.

What the team has created is essentially a catalog to help better study the genome of the mosquito, said Perera, a Boettcher Investigator in CSU's Arthropod-borne and Infectious Diseases Laboratory. This is the first time these pathways have been studied in live mosquitoes with dengue virus, although similar studies have been conducted under controlled conditions using cells cultured in the lab.

The data gleaned from the study is significant not just for virus control but also for mosquito biology.

"At the big-picture level, the methodology we developed can be used to learn more about how mosquitoes respond to the environment, and how they respond to things like insecticides," she said.

Nunya Chotiwan, co-author on the study and a doctoral candidate in microbiology at CSU, said metabolites -- lipids or fat, sugar, vitamins and hormones -- seem to provide something that the viruses need to thrive. Metabolites could also trigger an immune mechanism that could harm the virus.

"We're trying to learn, when the virus infects the mosquito, if it increases the presence of the metabolite, and whether we could exhaust that resource or increase the harmfulness of the resource so that the virus can't be passed on to another animal or human," said Chotiwan.

Metabolites are present at the beginning or end of a biochemical reaction, said Perera. In this study, the researchers identified what biochemical pathways are active during infection.

Scientists also identified some mosquito metabolites that have been found in humans, but the major remain unidentified.

"Sixty percent of the metabolites we saw are not yet identified," said Perera. "They could be unique to mosquitoes; it will take years for us to better identify them."

The research team is currently working to find biochemical pathways that could be used to block mosquito-borne viruses. "Our goal is to limit the resources available to the virus in the mosquito," she said.

Scientists are also looking at the first sign of infection in the insects. If they can prevent the infection from happening, they can disrupt the virus transmission cycle.

Based on these initial findings, Chotiwan has been able to block dengue virus. The team is now assessing whether Zika and chikungunya viruses, which are transmitted by the same mosquito, can be blocked in a similar way. 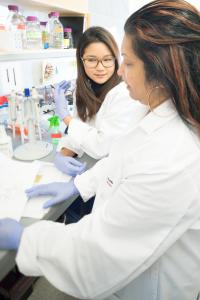