NOAA's GOES-East satellite provided days of infrared and visible imagery that showed the quick development and demise of Tropical Storm Philippe in the Atlantic Ocean. NASA's Aqua satellite captured a look at Philippe when it was in its "prime" as a tropical storm near Key West.

At NASA's Goddard Space Flight Center in Greenbelt, Md. an animation of imagery from NOAA's GOES East satellite was created that shows the development, movement and demise of Tropical Storm Philippe from Oct. 28 to Oct. 30. Philippe developed from Tropical Depression 18 in the western Caribbean Sea, moved northeast through the Gulf of Mexico to Florida's east coast and merged with a frontal system.

On Oct. 29 at 2:59 a.m. EDT (0659 UTC), the Atmospheric Infrared Sounder or AIRS instrument that flies aboard NASA's Aqua Satellite captured infrared temperature data on Philippe when it was still a tropical storm. At the time, the center of circulation was about 15 miles (25 km) west of Key West, Florida and thunderstorms stretched northeast to the Atlantic. Cloud top temperatures were as cold as minus 63 degrees Fahrenheit (minus 53 degrees Celsius) in those thunderstorms. NASA research has shown that storms with cloud top temperatures that cold have the ability to produce heavy rain.

The National Hurricane Center (NHC) issued the final advisory on Philippe on Oct. 29 at 5 p.m. EDT (2100 UTC) when it was dissipating over the western Atlantic Ocean.

At that time, the remnants of Philippe were located near 31.0 degrees north latitude and 75.0 degrees west longitude, about 290 miles (470 km) south of Cape Hatteras, North Carolina. The remnants of Philippe had merged with a frontal system and were moving toward the north-northeast near 46 mph (74 kph). Maximum sustained winds were near 60 mph (95 kph) with higher gusts and tropical-storm-force winds extended outward up to 230 miles (370 km) from the center.

NHC forecaster Stewart noted "The system has become elongated north-to-south within the frontal zone, and a new low-level center may have developed about 150 nautical miles farther north along the frontal boundary near NOAA buoy 41002. Now that Philippe has lost any tropical or subtropical characteristics due to merger with a synoptic-scale cold front, the system is declared to have dissipated." 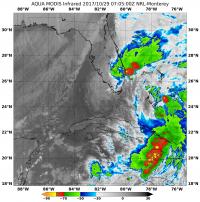