Lightning struck a bourbon warehouse, setting fire to a cache of 800,000 gallons of liquor in the Bardstown countryside of Kentucky in 2003. Some of it spilled into a nearby creek, spawning a massive fire tornado, or "bourbonado," as reported locally.

Aerial video of it inspired scientists to investigate fire whirls, tornados of fire, as something promising for oil spill remediation because the hydrocarbons burned with relatively little soot.

Their fire whirl investigations in the lab led them to find something that astonished them. The chaotic and dangerous fire whirl transformed into a tame and clean burning flame they call a "blue whirl."

One of its discoverers is now on a science team using supercomputers allocated by the Extreme Science and Engineering Discovery Environment (XSEDE) to reveal the structure of the blue whirl, a new type of flame that consists of four separate flames. The scientists hope blue whirls can one day be used to burn fuels more cleanly.

"The main finding of this new computational study is that we now know the main structure of the blue whirl," said Elaine Oran, professor and O'Donnell Foundation Chair VI, Department of Aerospace Engineering, Texas A&M University. Oran is a co-discoverer of the blue whirl and a co-author of a study on its structure published in PNAS, August 2020. "We know that it's a combination of many types of flames which come together and form themselves into probably the most ideal configuration for burning, which we had seen before."

A blue whirl is akin to a spinning blue flame that looks like a child's toy top. Oran says the top of it has the same shape as the sorting hat from Harry Potter. Most of its burning is along a very bright blue rim which spins.

The researchers used experimental data from the 2016 study that first discovered the blue whirl. The experimental setup consisted of two half-cylinders and a cylindrical stainless steel pan full of water. A liquid fuel, n-heptane, was poured on the surface of still water at the center of the pan and then was ignited. Two quartz half-cylinders were suspended over the pan. Offsetting the half-cylinders created two vertical slits that allowed air to be drawn in tangentially to the flame region, a commonly used to create fire whirls for laboratory study.

A chaotic pool fire formed at first. Cold air drawn into the chamber created a strong vertical flow next created a tall and intense fire whirl. Then, unexpectedly, it collapsed into the calm blue whirl flame structure.

"We studied the structure of this new flame through the numerical simulation, and we found out the type of burning, and where they occur," said study co-author Xiao Zhang, post-doctoral Researcher, Department of Aerospace Engineering, Texas A&M University, who works for Oran.

Supercomputer simulations helped tease out the blue whirl's structure, which turns out to be made of three types of flames. At bottom is a rich pre-mixed flame, crowned on top with a purplish hat-shaped diffusion flame. The simulations revealed a hidden flame surrounding the purple haze, just outside the diffusion flame. The three flames combine into a triple flame that forms its bright rim.

The scientists faced a few challenges in simulating the flames.

"The blue whirl in the [laboratory] experiments evolved and developed by itself," Zhang said. There were limited diagnostics from the experiments that didn't give us enough conditions to use to start off the calculations. We started out with a numerical hunt."

They developed new algorithms that could simulate low-Mach number flows efficiently and implemented the algorithms into a computational fluid dynamics code that solves the unsteady, compressible, reactive Navier-Stokes equations of flow. Using this code, they explored the effects of controlling parameters such as fuel and air inlet sizes and velocities. Eventually, they were able to capture the blue whirl in their simulations.

"These simulations of the blue whirl involved multiple scales in time and space," Zhang said. "We also needed to model multiple physics and the heavy hydrocarbon chemistry. These can be very difficult and expensive to compute. On top of that, we wanted to keep the 3D dynamics of this new flame. These 3D aspects added more cost to the computation."

The scientists were awarded supercomputer allocations on XSEDE, funded by the National Science Foundation. Through XSEDE, they made use of the Stampede2 supercomputer and the Ranch data storage system at the Texas Advanced Computing Center.

The simulations for the numerical hunt and the final blue whirl simulation consumed 4 million CPU hours distributed over the Deepthought2 system from the University of Maryland; the Thunder system from the Air Force Research Laboratory; and Stampede2, accounting for about 23K node hours on its Skylake nodes.

"What surprised me most was how it evolved from the fire whirl," Oran explained. "A fire whirl is a monster, a devastating thing. Then all of a sudden it turns into this quiet, tiny little flame with no turbulence. In the process of forming it, you saw all of these fluid dynamic modes of vortex breakdown, which is a beautiful fluid phenomenon that you might see from vortices shedding off of a wing of an airplane."

The researchers hope that further understanding of the blue whirl might help scientists develop ways to burn fuels more cleanly. "It can potentially be a new way to extract energy from traditional fossil fuels with minimal soot, reduced pollution, and environmental impact," Zhang said.

Said Oran: "I think it's important to explore, follow your curiosity, and try out new ideas. If we had never seen, for example, the fire on the lake in Kentucky, when all of the bourbon spilled onto the lake there and lightning ignited it, and it formed fire whirls on the lake, we would never have found the blue whirl. Every time you look under the rug, you find something new. A new insect, a new flame."

The study, "The structure of the blue whirl revealed," was published in the journal Science Advances August 12, 2020. The authors are Joseph D. Chung and Carolyn R. Kaplan, University of Maryland; Xiao Zhang and Elaine S. Oran, Texas A&M University. Study funding came from the National Science Foundation (grant CBET 1839510); the Army Research Office (grant W911NF1710524); Minta Martin Endowment Funds in the Department of Aerospace Engineering at the University of Maryland; the Glenn L. Martin Institute Chaired Professorship and the A. James Clark Distinguished Professorship at the A. James Clark School of Engineering at the University of Maryland, and the TEES Distinguished Professorship of Texas A&M University for their support of this work. Research was also sponsored, in part, by the Army Research Laboratory and was accomplished under Cooperative Agreement Number W911NF-19-2-0307 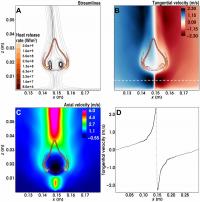