The Xerces blue butterfly was last seen flapping its iridescent periwinkle wings in San Francisco in the early 1940s. It's generally accepted to be extinct, the first American insect species destroyed by urban development, but there are lingering questions about whether it was really a species to begin with, or just a sub-population of another common butterfly. In a new study in Biology Letters, researchers analyzed the DNA of a 93-year-old Xerces blue specimen in museum collections, and they found that its DNA is unique enough to merit being considered a species. The study confirms that yes, the Xerces blue really did go extinct, and that insect conservation is something we have to take seriously.

"It's interesting to reaffirm that what people have been thinking for nearly 100 years is true, that this was a species driven to extinction by human activities," says Felix Grewe, co-director of the Field's Grainger Bioinformatics Center and the lead author of the Biology Letters paper on the project.

"There was a long standing question as to whether the Xerces blue butterfly was truly a distinct species or just a population of a very widespread species called the silvery blue that's found across the entire west coast of North America," says Corrie Moreau, director of the Cornell University Insect Collections, who began work on the study as a researcher at Chicago's Field Museum. "The widespread silvery blue species has a lot of the same traits. But we have multiple specimens in the Field Museum's collections, and we have the Pritzker DNA lab and the Grainger Bioinformatics Center that has the capacity to sequence and analyze lots of DNA, so we decided to see if we could finally solve this question."

To see if the Xerces blue really was its own separate species, Moreau and her colleagues turned to pinned butterfly specimens stored in drawers in the Field's insect collections. Using forceps, she pinched off a tiny piece of the abdomen of a butterfly collected in 1928. "It was nerve-wracking, because you want to protect as much of it as you can," she recalls. "Taking the first steps and pulling off part of the abdomen was very stressful, but it was also kind of exhilarating to know that we might be able to address a question that has been unanswered for almost 100 years that can't be answered any other way."

Once the piece of the butterfly's body had been retrieved, the sample went to the Field Museum's Pritzker DNA Laboratory, where the tissues were treated with chemicals to isolate the remaining DNA. "DNA is a very stable molecule, it can last a long time after the cells it's stored in have died," says Grewe.

Even though DNA is a stable molecule, it still degrades over time. However, there's DNA in every cell, and by comparing multiple threads of DNA code, scientists can piece together what the original version looked like. "It's like if you made a bunch of identical structures out of Legos, and then dropped them. The individual structures would be broken, but if you looked at all of them together, you could figure out the shape of the original structure," says Moreau.

The study's findings have broad-reaching implications. "The Xerces blue butterfly is the most iconic insect for conservation because it's the first insect in North America we know of that humans drove to extinction. There's an insect conservation society named after it," says Moreau. "It's really terrible that we drove something to extinction, but at the same time what we're saying is, okay, everything we thought does in fact align with the DNA evidence. If we'd found that the Xerces blue wasn't really an extinct species, it could potentially undermine conservation efforts."

DNA analysis of extinct species sometimes invites questions of bringing the species back, à la Jurassic Park, but Grewe and Moreau note in their paper that those efforts could be better spent protecting species that still exist. "Before we start putting a lot of effort into resurrection, let's put that effort into protecting what's there and learn from our past mistakes," says Grewe.

Moreau agrees, noting the urgent need to protect insects. "We're in the middle of what's being called the insect apocalypse-- massive insect declines are being detected all over the world," says Moreau. "And while not all insects are as charismatic as the Xerces blue butterfly, they have huge implications for how ecosystems function. Many insects are really at the base of what keeps many of these ecosystems healthy. They aerate the soil, which allows the plants to grow, and which then feeds the herbivores, which then feed the carnivores. Every loss of an insect has a massive ripple effect across ecosystems."

In addition to the study's implications for conservation, Grewe says that the project showcases the importance of museum collections. "When this butterfly was collected 93 years ago, nobody was thinking about sequencing its DNA. That's why we have to keep collecting, for researchers 100 years in the future." 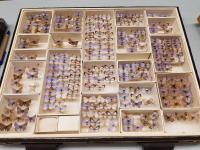