A new study published in the journal Nature Ecology and Evolution reveals that increased moisture levels may have been a primary cause of death for giant herbivores approximately 10,000 years ago.

"The mass extinctions of mega-herbivores across the globe have been an ongoing puzzle for scientists," said professor Matthew Wooller, director of the Alaska Stable Isotope Facility at the University of Alaska Fairbanks. "We looked at carbon and nitrogen isotopes in ancient animal bones to learn about what the herbivores were eating, which can also tell us about what climate was like around the time that the megafauna died."

Mega-herbivores -- large vegetarian animals including some species of horses, bison and mammoths that used to tromp around Alaska -- rapidly disappeared or declined at the end of the Pleistocene era about 10,000 years ago. The mass extinction coincided with a period of significant environmental change, when the Earth transitioned from the last glacial period to the current interglacial period. This was also the time that modern humans began to spread into the Americas.

Wooller was part of an international research team led by University of Adelaide researchers Alan Cooper and Tim Rabanus-Wallace that looked at bone samples from a number of species that lived in a variety of environments on different continents. Funding came from the National Science Foundation, Norges Forskningsråd, Australian Research Council and Australian Centre for Ancient DNA. Wooller is also part of the UAF College of Fisheries and Ocean Sciences.

The researchers used carbon isotope data to place megafauna fossils on a timeline. Nitrogen isotope data helped showed what environment was like when the animals were alive.

Wet and dry environments can leave very different isotopic signatures in soils, plants and subsequently the bones of herbivores. Nitrogen isotopes found in the collagen of herbivores' bones reveal the environment they lived in.

"You are what you eat," said Tim Rabanus-Wallace, a Ph.D. student at the University of Adelaide, who spearheaded this project. "When you consume food with a certain ratio of heavy and light isotopes, your bones develop a related ratio. So we can learn what and where different animals ate based on the isotopes in their bones."

Across the board, these isotopes show a spike in moisture just prior to the extinction of megafauna.

"If you're adapted to grass, you can't live in a forest," Rabanus-Wallace said. "The plants are full of plant toxins specifically designed to fend off herbivores."

This trend was observed across continents, even though the timing of the extinctions varied.

"We find that on different continents the climate changes happened at different times, but they all showed a similar kind of feature, that moisture levels changed just prior to extinction," Wooller said.

These results are a good indication that increasing moisture had a significant role in the extinctions, and support the findings from previous, regionally focused research on the mega-herbivore extinctions. However, this does not rule out the possibility that other environmental changes, including the spread of humans, also played significant parts. As the researchers continue to collect a broader range of global samples, it will be easier to piece together the whole story of what caused the extinctions at the end of the Pleistocene. 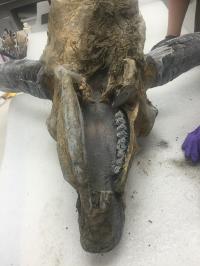