Pittsburgh, Pennsylvania…A team of researchers has announced the discovery of a bizarre, bird-like dinosaur, named Anzu wyliei, that provides paleontologists with their first good look at a dinosaur group that has been shrouded in mystery for almost a century. Anzu was described from three specimens that collectively preserve almost the entire skeleton, giving scientists a remarkable opportunity to study the anatomy and evolutionary relationships of Caenagnathidae (pronounced SEE-nuh-NAY-thih-DAY)—the long-mysterious group of theropod dinosaurs to which Anzu belongs. The scientific paper describing the discovery appears today in the well-known and freely-accessible journal PLOS ONE.

The three described fossil skeletons of Anzu were unearthed in North and South Dakota, from roughly 66 million-year-old rocks of the Hell Creek Formation, a rock unit celebrated for its abundant fossils of famous dinosaurs such as Tyrannosaurus rex and Triceratops.

The team of scientists who studied Anzu was led by Dr. Matthew Lamanna of Carnegie Museum of Natural History in Pittsburgh. Dr. Lamanna's collaborators include Dr. Hans-Dieter Sues and Dr. Tyler Lyson of the Smithsonian Institution's National Museum of Natural History in Washington, DC, and Dr. Emma Schachner of the University of Utah in Salt Lake City. According to Dr. Lamanna, "Anzu is far and away the most complete caenagnathid that has ever been discovered. After nearly a century of searching, we paleontologists finally have the fossils to show what these creatures looked like from virtually head to toe. And in almost every way, they're even weirder than we imagined."

At roughly 11 feet long and five feet tall at the hip, Anzu would have resembled a gigantic flightless bird, more than a 'typical' theropod dinosaur such as T. rex. Its jaws were tipped with a toothless beak, and its head sported a tall, rounded crest similar to that of a cassowary (a large ground bird native to Australia and New Guinea). The neck and hind legs were long and slender, also comparable to a cassowary or ostrich. Although the Anzu specimens preserve only bones, close relatives of this dinosaur have been found with fossilized feathers, strongly suggesting that the new creature was feathered too. The resemblance to birds ends there, however: the forelimbs of Anzu were tipped with large, sharp claws, and the tail was long and robust. Says Dr. Lamanna, "We jokingly call this thing the 'Chicken from Hell,' and I think that's pretty appropriate. So we named it after Anzu, a bird-like demon in ancient mythology."

The species is named for a Carnegie Museums of Pittsburgh Trustee's grandson, Wylie.

Not only do the fossils of Anzu wyliei paint a picture of this particular species, they shed light on an entire group of dinosaurs, the first evidence of which was discovered almost 100 years ago. In 1924, paleontologist Charles Whitney Gilmore described the species Chirostenotes pergracilis from a pair of fossil hands found a decade earlier in ~74 million-year-old rocks in Alberta, Canada. Later, in 1940, Caenagnathus collinsi was named, based on a peculiar lower jaw from the same beds. More recently, after studies of these and other fragmentary fossils, Hans Sues and other paleontologists determined that Chirostenotes and Caenagnathus belonged to the same dinosaur group, Caenagnathidae, and that these animals were close cousins of Asian oviraptorid theropods such as Oviraptor.

Oviraptor ('egg thief') is widely known because the first fossil skeleton of this animal, described in 1924, was found atop a nest of dinosaur eggs, suggesting that the creature had died in the act of raiding the nest. This thinking prevailed until the 1990s, when the same type of egg was found with a baby oviraptorid inside, demonstrating that, rather than a nest plunderer, Oviraptor was a caring parent that perished while protecting its eggs. More than a dozen oviraptorid species have been discovered, all in Mongolia and China, and many are known from beautifully-preserved, complete or nearly complete skeletons. Additionally, beginning in the 1990s, several small, primitive relatives of oviraptorids were unearthed in much older, ~125 million-year-old rocks in northeastern China. Many of these are also represented by complete skulls or skeletons, some of which preserve fossilized feathers. Researchers have established that caenagnathids, oviraptorids, and these more archaic Chinese species are closely related to one another, and have united them as the theropod group Oviraptorosauria. The occurrence of oviraptorosaurs in both Asia and North America was not a surprise to paleontologists, because these continents were frequently connected during the Mesozoic Era (the 'Age of Dinosaurs'), allowing dinosaurs and other land animals to roam between them. However, because their fossils were so incomplete, caenagnathids remained the most poorly known members of Oviraptorosauria, and indeed, one of the least understood of all major dinosaur groups. "For many years, caenagnathids were known only from a few bits of the skeleton, and their appearance remained a big mystery," says Dr. Sues.

The nearly completely represented skeleton of Anzu opens a window into the anatomy of this and other caenagnathid species. Armed with this wealth of new information, Dr. Lamanna and his team were able to reconstruct the evolution of these extraordinary animals in more detail than ever before. Analysis of the relationships of Anzu reaffirmed that caenagnathids form a natural grouping within Oviraptorosauria: Anzu, Caenagnathus, Chirostenotes, and other North American oviraptorosaurs are more closely related to each other than they are to most of their Asian cousins—a finding that had been disputed in recent years. Furthermore, the team's analysis confirmed the recent hypothesis that the enormous (and aptly-named) Gigantoraptor—at a weight of at least 1.5 tons, the largest oviraptorosaur known to science—is an unusual member of Caenagnathidae as well, instead of an oviraptorid as had initially been proposed. "We're finding that caenagnathids were an amazingly diverse bunch of dinosaurs," says Dr. Lamanna. "Whereas some were turkey-sized, others—like Anzu and Gigantoraptor—were the kind of thing you definitely wouldn't want to meet in a dark alley. Apparently these oviraptorosaurs occupied a much wider range of body sizes and ecologies than we previously thought."

The anatomy and ancient environment of Anzu provide insight into the diet and habitat preferences of caenagnathids as well. Although the preferred food of these oviraptorosaurs remains something of a puzzle, Dr. Lamanna and collaborators think that caenagnathids were probably omnivores—like humans, animals that could eat either meat or plants. Moreover, studies of the rocks in which several of the most complete caenagnathid skeletons have been found show that these strata were laid down in humid floodplain environments, suggesting that these dinosaurs favored such habitats. In this way, caenagnathids appear to have differed greatly from their oviraptorid cousins, all of which have been found in rocks that were deposited under arid to semi-arid conditions . "Over the years, we've noticed that Anzu and some other Hell Creek Formation dinosaurs, such as Triceratops, are often found in mudstone rock that was deposited on ancient floodplains. Other dinosaurs, like duckbills, are found in sandstone deposited in or next to rivers," says Dr. Lyson, who found his first Hell Creek fossil on his family's ranch in North Dakota when he was only six years old.

Anzu led a life that was fraught with danger. In addition to sharing its Cretaceous world with the most notorious carnivore of all time—T. rex—this oviraptorosaur seems to have gotten hurt a lot as well. Two of the three specimens show clear evidence of injuries: one has a broken and healed rib, while the other has an arthritic toe bone that may have been caused by an avulsion fracture (where a tendon ripped a piece off the bone to which it was attached). Says Dr. Schachner, "These animals were clearly able to survive quite a bit of trauma, as two of the specimens show signs of semi-healed damage. Whether these injuries were the result of combat between two individuals or an attack by a larger predator remains a mystery."

As much insight as the Anzu skeletons provide, paleontologists still have much to learn about North American oviraptorosaurs. Ongoing studies of these and other important fossils promise to remove more of the mystery surrounding these remarkable bird-like creatures. "For nearly a hundred years, we paleontologists knew almost nothing about these dinosaurs," concludes Dr. Lamanna. "Now, thanks to Anzu, we're finally starting to figure them out."

A fully-articulated cast of Anzu wyliei is on public view in Carnegie Museum of Natural History's Dinosaurs in Their Time exhibition.

Carnegie Museum of Natural History, one of the four Carnegie Museums of Pittsburgh, is among the top natural history museums in the country. It maintains, preserves, and interprets an extraordinary collection of 22 million objects and scientific specimens used to broaden understanding of evolution, conservation, and biodiversity. Carnegie Museum of Natural History generates new scientific knowledge, advances science literacy, and inspires visitors of all ages to become passionate about science, nature, and world cultures. More information is available by calling 412.622.3131 or by visiting the website, http://www.carnegiemnh.org. 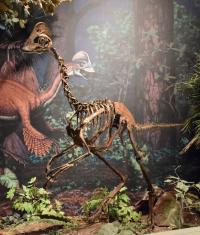 <I>Anzu</I> on Display at CMNH 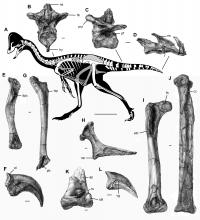