This press release is also available in German.

When unusually small dinosaur fossils were found in a quarry on the northern edge of the Harz Mountains in 1998, it was initially assumed that these were the remains of a group of young dinosaurs. This was a fallacy, as the Bonn palaeontologist, Dr. Martin Sander, recently discovered. The microstructure of the bones, he says, makes it very likely that the animals involved were adults – a scientific sensation: at a maximum estimated weight of one tonne they were only a fiftieth the weight of their closest relatives, the brachiosaurs, and thus by far the smallest of the giant dinosaurs which have ever been found. The study will be published on 8 June in the journal 'Nature'.

In dinosaur bones there are what are known as growth marks, similar to the annual rings on trees. When the dinosaurs are young the growth marks are comparatively far apart, because the animal is still growing fast. When the dinosaur has reached its maximum size, the growth marks lie correspondingly close together. 'And it is precisely these tightly compressed marks that we have discovered just beneath the surface of the fossil's bones,' says Bonn lecturer Dr. Martin Sander, one of the few experts worldwide on the micro-structure of dinosaur skeletons. 'So the dinosaurs must have been fully grown when they died.' The newly discovered species is a dwarf compared with the other giant dinosaurs: the animals were only just longer and heavier than a car. 'They stopped growing when they reached 6 metres in length and a tonne in body mass,' Martin Sander estimates. Their cousins, by contrast, were up to 45 metres long and weighed in at 80 tonnes – as much as a small town of over 1,000 inhabitants. They are the biggest land animals which have ever existed.

The 150 million year old fossil bones had been regarded as a scientific rarity even before this discovery: 150 million years ago large parts of Germany were under water. There were only a few islands which lay above sea level – for example, the region around Oker. Dinosaurs, however, are land animals, with the result that fossil finds of dinosaurs are correspondingly rare in Germany.

Elephants as small as St. Bernards and the 'Flores hobbit'

This island situation may well be the reason why the 'pygmy dinosaurs' evolved: when the sea level rose, flooding more and more land, food resources became scarce. 'The result was enormous pressure to evolve: smaller animals which needed less food had better chances of survival,' explains Nils Knötschke of the Dinopark in Münchehagen, who has exposed more than 80 per cent of the bones found and also headed the excavations in the quarry. 'Shrinkage like this due to a reduction in the food available can take place extremely rapidly, sometimes within 10 or 20 generations,' Dr. Sander confirms. In Britain, he adds, deer were introduced to the Shetlands which within a short time evolved into a dwarf species of deer.

On the Indonesian islands of Floresthere used to be a miniature version of the elephant which at a height of 90 centimetres was hardly bigger than a St. Bernard – small enough to serve as food for the 'Dragon of the Orient', the Komodo dragon. This all fits in with the discovery which the scientific journal Nature reported on last year: on Flores also the 18,000-year-old bones of a 'dwarf' human. This 'Flores hobbit' was only one metre tall.

The sensational finds were made eight years ago: in September 1998 Holger Luedtke, a hobby palaeontologist came across teeth and other remains of a herbivorous dinosaur in the Langenberg quarry near Oker on the northern edge of the Harz Mountains in North Germany. The animal was provisionally christened 'Hanna', with Lower Saxony's premier Christian Wulff in attendance as its 'godfather'. 'Hanna' is now being given a new scientific name: in honour of its discoverer it is to be called 'Europasaurus holgeri'.

An international team of scientists have excavated and preserved more than 1000 dinosaur fossils in the quarry since 1998 at the invitation of the 'Association for the Promotion of Palaeontology in Lower Saxony'. Because of the small size of the fossils they originally assumed that they had come upon a group of young dinosaurs. The scientific description of the new island dinosaur species, which is unique worldwide, was directed by Dr. Octávio Mateus of the Museo da Lourinha in Portugal. The palaeontologist Thomas Laven made a detailed study of 'Hanna's' skull: it is the only skull of a sauropod dinosaur to be hitherto found in Europe. Thomas Laven made sketches reconstructing the appearance of the animal, on the basis of which life-size models of the mini-dinosaur have now been made. They can be seen in the Münchehagen dinosaur park (http://www.dino-park.de/).

The quarry in the Harz has turned out in the meantime to be a veritable El Dorado of dinosaurs – with spectacular fossil finds of flying dinosaurs, crocodiles and tortoises. Even the footprints of dangerous carnivorous dinosaurs were found on the steep sides of the quarry. The excavation site is thus one of the few places worldwide in which the bones and the footprints of dinosaurs occur together – a veritable 'Jurassic Harz' which would have been Steven Spielberg's dream.

Sensational find: The mini-dinosaurs from the Harz Mountains 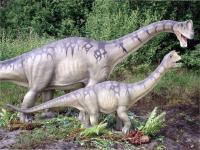