MIAMI – A new study from researchers at the University of Miami (UM) Rosenstiel School of Marine and Atmospheric Science is the first to document that fish larvae produce sound. These "knock" and "growl" sounds may help small larvae maintain group cohesion in the dark.

"Although many adult fishes produce sounds, no one has previously considered that larvae, too, may be sound producers. This is the first study to show that fish larvae have an acoustic repertoire," said Claire Paris, UM Rosenstiel School associate professor of ocean sciences. "This is a true discovery as it reveals the existence of a communication system for young fish larvae."

The UM Rosenstiel School research team set up both field and laboratory experiments to listen to larval gray snapper, Lutjanus griseus, an economically valuable fish that spend their first 30 days of life as pelagic larva before settling in shallow seagrass beds.

In the field experiment, the scientists set a drifting in situ chamber, called DISC, equipped with audio and video recording systems, near Fowey Rocks lighthouse in the northern Florida Keys to record larval orientation behavior in the pelagic environment. In total 58 deployments were conducted, 27 during the day and 31 at night. The team also recorded sounds in a laboratory setting to confirm that the sounds observed in the field were from gray snapper larvae. The researchers also referred to the public sound archive at the Macaulay Library to compare the larval sounds to those produced by adult L. griseus.

The researchers observed that larvae produced "knocks" and "growls" in the range of 200–800 Hz, which is within the hearing range of most adult fish. The fish larvae produced these sounds during 70% of the nighttime trials, and none of the daytime trials. The gray snapper larvae used in the study arrived in a large group over the span of a few hours, suggesting that these acoustic signals may provide a mechanism for these larvae to maintain group cohesion during their pelagic journey.

"The study was setup to record ambient sounds around the drifting arena that might guide the fish larval orientation. It was a fantastic surprise to listen to the recording and hear that the larva itself was emitting sound," said Paris. "Communication between larvae could allow them to maintain group cohesion, which is critically important for faster swimming, finding navigational signals and settlement cues, and better survival during the pelagic phase."

"This discovery has important conservation implications as well," said Erica Staaterman, UM Rosenstiel School Ph.D. student and lead author of the paper. "As anthropogenic noise in the marine environment continues to increase, it is important to understand potential impacts on these previously undiscovered acoustic communication systems."

New study first to document the voices of fish larvae 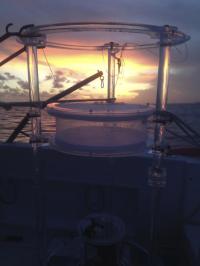