At first glance, hero shrews don't seem super exciting--they're small grayish-brown mammals, related to moles and hedgehogs, and they look a little bit like chubby, long-nosed rats. But under their fur, they have some of the strangest skeletons in the animal kingdom. Hero shrews have unique interlocking backbones that make their spines insanely strong--the shrews only weigh a quarter of a pound, but there are stories that their backs can support the weight of a full-grown man standing on them. Scientists aren't sure why these tiny animals developed such crazy backbones, but researchers looking for clues took CT scans of shrew spines to try to get a better sense of how the spines evolved.

"Hero shrews have crazy-looking spines--their vertebrae are squished flat like a pancake, and they have a bunch of extra places where they touch the vertebrae next to them. It makes a really long stiff column along their back, and there aren't good field reports as to what this structure might be useful for," says Stephanie Smith, a postdoctoral researcher at the Field Museum and the University of Chicago and the lead author of a new paper in Proceedings of the Royal Society B. "So we wanted to look at those vertebrae and figure out how they might be using them."

Western scientists first became aware of hero shrews about a hundred years ago, but the Mangbetu people of the Congo Basin have long known about the shrews' incredible strength. There's a (maybe apocryphal) story about Mangbetu people showing a team of American and European scientists how a grown man could stand on a hero shrew's back without hurting it. A second species of hero shrew, with a spine complexity in between that of the original hero shrew and a regular shrew, was described in 2013. But researchers haven't been able to spot the shrews in the wild putting these backbones to good use--the shrews are hard to find, and they live in areas where political unrest makes research trips nearly impossible.

"There are two species of hero shrew, and they're both very poorly known. We have specimens of them at the museum, but we can't see them in action. It's almost like studying an animal in the fossil record, where we have specimens that tell us about their anatomy, but we can't bring a live specimen into the lab and observe it," says Kenneth Angielczyk, a curator of paleontology at the Field Museum and the paper's senior author.

The authors of the 2013 paper, including the Field's late head of collections Bill Stanley, posited that the hero shrews' thick spines might be used as a brace as the animals shifted logs and peeled apart palm stems to get at insects. But no one's observed them doing that. All we know for sure is that the shrews' backbones are unique.

"Their spines are arched, and when they contract their muscles to squeeze their vertebrae together, the bones interlock really tightly. When that happens, it becomes one solid block of vertebrae instead of a bunch of bendy pieces," says Smith.

Without any live shrews to observe, Smith and Angielczyk turned to the bones in the Field Museum's collections. They took micro-CT scans of the bones of the two known hero shrew species, as well as a "normal" shrew for comparison. These scans revealed minute details of the bones, but more importantly, they also hinted at how the bones were used in life.

"Bones contain a record, to some degree, of the forces that are acting on them during life. There are special cells in the bone that detect when pressure is put on it. They send out signals to reorganize the bone to be better at handling the forces they're under, so you have bones responding throughout an animal's life to habitual forces," explains Smith. "My absolute favorite example of this was a paper where they put sheep in tall shoes, like high heels, and the different angle of pressure changed the inner structure of their leg bones."

Armed with the knowledge that the inner structure of bone changes depending on the direction of the forces that have acted on the bone, Smith and Angielczyk tried to determine what these shrews had gotten up to. "We found that the two species of hero shrews have really, really thick, dense spongy bone inside their vertebrae. The percentage of bone is high relative to the total volume of the structure compared to other shrews," Smith says. "That makes the bone a lot sturdier. It's like how a chair with thick legs and crossbeams connecting those legs is sturdier than a chair with just four spindly legs and no crossbeams."

"That's really interesting because it says that these guys can take a lot of force compressing their spine from head to tail. And that's the main direction that force is applied to the spine in an animal that has four legs," continues Smith. "It doesn't necessarily solve the question of what are they doing, but it does give us an indicator that they're habitually experiencing strong forces in that direction."

To sum up: hero shrew spines don't just look tough from the outside, they're also super dense inside, in a way that indicates that they're able to withstand pressure from being scrunched up like an inchworm. It doesn't confirm Stanley's hypothesis that the shrews scrunch up and then extend their spines to wedge apart palm trunks to get at bugs--only direct observation can do that. But it does indicate that the shrew's backbones could resist the forces such behavior would generate.

In addition to studying the forces the hero shrews were exposed to in life, Smith also helped quantify the differences between the two known species. The original hero shrew described in 1910 has a more complex spine than the new species from 2013, although the latter has a more complex spine than regular shrews. This suggests the transitional features of the 2013 species (Thor's hero shrew) can provide information about how the 1910 shrew evolved from a slender-spined ancestor. To help quantify the differences between the shrews' spines, Smith painstakingly counted all the little nodules and tubercles on the specimens' vertebrae. "I think the grand total was something like 17,000," she says. "We found that the Thor's hero shrew was intermediate on both the inside and the outside. Because of the way that bone reacts to load, that means that it could also be functionally intermediate. But that's just a hypothesis at this point."

And if this all seems like a lot of time and effort thinking about shrews at a time when the world has bigger fish to fry, the researchers note that it helps answer bigger questions about the evolution of mammals.

"Small mammals experience the world differently than we do, and we don't have all that much information about the way that being small affects their interaction with the world," says Angielczyk. "Part of what we're interested in is the question of how you can be a small mammal--what do you need to be effective at that and resist forces that are being applied to your body in different functional contexts. It's something that we don't know very much about, but it's important, because we evolved from small mammals. Better knowledge of what it takes to be a small mammal is important for understanding a lot of weird things about mammals in general, including us."

Smith has no plans to move on from studying shrews anytime soon. "Shrews are really interesting ecologically, and they're so small they have almost secret powers," she says. "They're incredibly diverse, and I think they're beautiful. They're dope as hell." 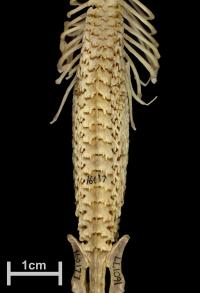