The demand response (DR), i.e., the changes in electricity usage of consumers in response to incentive payments, is expected to be one of the solutions to supply-side anomalies, such as fluctuations in wind and solar generation. The DR takes various forms depending on its design, including price/incentives, prearranged contracts, direct load control, and so on. In contract-based DR, the aggregator contracts with individual consumers for their scheduled amounts of negawatt energy. Meanwhile, it is inevitable that some of the participants default in providing the scheduled negawatt energy owing to demand-side fluctuations such as instrument faults. Therefore, the detection of failure sources (i.e., defaulting participants) is an important function of the aggregator.

The detection of defaulting participants may be easily performed if the aggregator can continuously meter their real-time consumption via smart meters. However, such metering is difficult in practice from the viewpoint of communication costs. Moreover, real-time continuous metering will be a barrier to social acceptance for the DR. Thus, it is preferable to detect defaulting participants with more limited information, e.g., by irreversible data compression and intermittent metering.

A group of researchers of Nagoya University, Hokkaido University, and Tokyo University of Science has developed a method to detect defaulting participants in a contract-based DR program with the data of the time series of the total amount of negawatt energy and the data of the actual negawatt energy of a limited number of participants, which are inspected via smart meters. In the development, they have focused on the fact that the DR is prearranged by contracts, i.e., only a few participants are defaulting on providing their scheduled negawatt energy. On the basis of this prior knowledge, they have considered to apply the technique of the so-called sparse reconstruction, i.e., reconstructing a sparse vector from a small number of scalar equations, to the detection problem. However, the exact solution is not always derived by direct application of the standard sparse reconstruction technique to the detection problem. By observing this result, they have developed an iterative method that improves the sparse reconstruction in each iteration by including inspection data from the previous iteration. For the proposed method, it is theoretically guaranteed that the result is exact. Moreover, the method enables the detection with a small number of inspections.

An innovative method for detecting defaulting participants based on sparse reconstruction 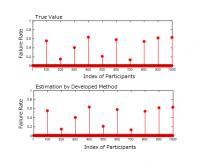