Hunger increases risk-taking behaviour in snails, according to research from neuroscientists at the University of Sussex.

In a paper published in the Science Advances journal, Professor George Kemenes, Professor Kevin Staras and Dr Michael Crossley showed that pond-snails have the ability to alter their food preferences in the face of extreme hunger.

The team demonstrated that in order to maximise food intake and aid their survival, hungry animals were prepared to risk ingesting a potentially harmful substance that their fully-fed counterparts would always reject.

Using brain recording techniques, they determined that this was due to central dopaminergic interneurons which act like a sophisticated control switch increasing risky decision-making as hunger levels rise.

Professor Kevin Staras said: "Balancing risk and survival is common to most organisms and by focusing on pond snails as a model, we're able to gain insight into similar mechanisms in complex animals where these questions are much more difficult to investigate."

Dr Michael Crossley added "Our approach allows us to unravel the critical brain control mechanisms underlying decisions about when and what to eat."

In the research, funded by the Biotechnology and Biological Sciences Research Council (BBSRC), Professor Kemenes, Professor Staras and Dr Crossley also managed to successfully manipulate the neural network by blocking the action of dopamine-containing neurons to reconfigure fully-fed snails to exhibit a hungry animal phenotype.

As a result fully-fed risk averse snails changed into risk-taking ones that gambled on a non-palatable substance being edible.

Professor Kemenes said: "Understanding how motivation controls feeding behaviour is of major societal relevance and there are instances when humans facing extreme situations also alter what they are willing to eat.

"For example, during famines, people have been reported to resort to eating grass, leaves, toasted tree bark and even boiled leather belts, all of which have questionable nutritional value and come with a high risk of harmful effects." 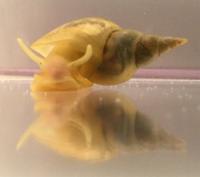 Two Neurons Involved in the Control of Feeding Behavior