In Bavaria, the Tithonian Konservat-Lagerstätte of lithographic limestone is well known as a result of numerous discoveries of emblematic fossils from that area (for example, Archaeopteryx). Now, for the first time, researchers have found fossil insects in the French equivalent of these outcrops - discoveries which include a new species representing the oldest known water treader.

Despite the abundance of fossils in the equivalent Bavarian outcrops, fewer fossils have been obtained from the Late Kimmeridgian equivalents of these rocks in the departments of Ain and Rhône in France. Many outcrops are recorded (for example Cerin and Orbagnoux), but the fauna found there is essentially of marine origin, being made up of crustaceans and fishes. Some layers have provided dinosaur footprints, but until today's announcement the only known terrestrial organisms were plant remains transported into the ancient lagoons.

During the course of two field expeditions in 2012 and 2013 French researchers working with the help of two active teams of amateur scientists (Société des Naturalistes et Archéologues de l'Ain and the Group 'Sympetrum Recherche et Protection des Libellules') discovered the first insects from the Orbagnoux outcrop, together with traces of activities of these organisms on leaves and in the sediment.

The newly discovered insect was described today, in the open access journal PeerJ. The bug was 6 mm long and is the oldest record of the aquatic bug lineage of the Gerromorpha which comprises the water striders and the water measurers. This is the oldest known water treader (Mesoveliidae), the sister group of all other gerromorphan lineages. In a similar manner to some of its recent relatives, this aquatic bug could have lived in brackish environments.

In addition, traces of insect activity on plants were found, comprising surface feeding traces on Zamites leaves. Such traces are quite rare in the fossil record and in this situation they demonstrate the presence of strictly terrestrial insects on the emerged lands that were surrounded by these Jurassic lagoons.

The exquisite quality of preservation of the fossils suggests that these rocks are likely to provide new fossil insects of crucial importance for the knowledge of the Upper Jurassic insect fauna, an important transition period in the evolution of the terrestrial environments towards the Lower Cretaceous diversification of the flowering plants.

PDF of this Press Release: http://static.peerj.com/pressReleases/2014/PressReleasePeerJ_Nel.pdf

Link to the Press Preview of the Original Article (this link should only be used BEFORE the embargo ends): http://static.peerj.com/press/previews/2014/08/510.pdf (note: this is an author proof and so may change slightly before publication)

Link to the Published Version of the article (quote this link in your story – the link will ONLY work after the embargo lifts): https://peerj.com/articles/510 - your readers will be able to freely access this article at this URL.

All works published in PeerJ are Open Access and published using a Creative Commons license (CC-BY 4.0). Everything is immediately available—to read, download, redistribute, include in databases and otherwise use—without cost to anyone, anywhere, subject only to the condition that the original authors and source are properly attributed.

PeerJ has an Editorial Board of almost 900 respected academics, including 5 Nobel Laureates. PeerJ was the recipient of the 2013 ALPSP Award for Publishing Innovation.

The Late Kimmeridgian marine limestones of the area around Orbagnoux (Rhône, France) are well known for their fish fauna and terrestrial flora. Here we record the first insects and their activities (mines on leaves and trails in sediments) from these layers, including the oldest record of the gerromorphan bugs, as a new genus and speciesGallomesovelia grioti, attributed to the most basal family Mesoveliidae and subfamily Madeoveliinae. These new fossils suggest the presence of a complex terrestrial palaeoecosystem on emerged lands near the lagoon where the limestones were deposited. The exquisite state of preservation of these fossils also suggests that these outcrops can potentially become an important Konservat-Lagerst 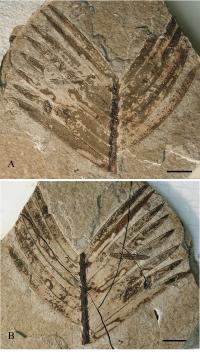