A study conducted by TU Wien and 30 European partners shows that the timing of the floods has shifted across much of Europe, dramatically in some areas. When a major flood event occurs it is often attributed to climate change. However, a single event is not proof, and so far it has been unclear whether climate change has a direct influence on river floods at large scales in Europe.

A large international project led by Prof. Guenter Bloeschl from the Institute of Hydraulic Engineering and Water Resources Management at TU Wien has now collected and analysed 50 years of data from over 4,000 hydrometric stations from 38 European countries. This is an unprecedented dataset in terms of coverage across Europe and the sheer number and diversity of river systems that have been included.

The result: Climate change has a real impact on flood events in some regions. This has been seen by a shift in the timing of floods over the years. Depending on the cause of the flood events, they occur earlier in some regions, in others they occur later. The results have now been published in Science journal.

The magnitude does not tell you everything

"In flood research, we are often concerned with the annual probability of the occurrence of floods," says Prof. Guenter Bloeschl from TU Wien. "By observing their magnitudes one can estimate a one hundred-year flood as a high-water event that occurs with a probability of one percent in any one year." However, while probabilities and magnitudes are an essential aspect of flood risk management, they are not necessarily the most sensitive characteristics for detecting the impact of climate change, as they do not only depend on the climate: "If one only examines the magnitude of flood events, the role of the climate can be masked by other effects," explains Guenter Bloeschl. "Land use change by urbanisation, intensifying agriculture and deforestations are other factors affecting flood events."

The timing provides information on the influence of the climate

In order to understand the connection between climate and floods, Bloeschl and his team looked closely at the timing of the flood events in different regions of Europe. "The timing of a flood provides information about its likely cause," says Bloeschl. For example, in much of north-west Europe and the Mediterranean, floods occur more frequently in the winter, when evaporation is low and precipitation is intense. In Austria, on the other hand, the highest magnitude floods are associated with summer downpours. In North-Eastern Europe, the risk of flooding is at its highest in spring because of snow melt. The timing at which floods occur is thus much more directly related to the climate, in contrast with the absolute magnitude of the flood event.

Flood data from all over Europe have been meticulously compiled, screened and statistically analysed. These show that the floods in Europe have indeed shifted considerably over the last 50 years: "In the north-east of Europe, Sweden, Finland and the Baltic States, floods now tend to occur one month earlier than in the 1960s and 1970s. At that time, they typically occurred in April, today in March, "says Guenter Bloeschl. "This is because the snow melts earlier in the year than before, as a result of a warming climate."

In parts of northern Britain, western Ireland, coastal Scandinavia and northern Germany, on the other hand, floods now tend to occur about two weeks later than they did a couple of decades ago. Later winter storms are likely to be associated with a modified air pressure gradient between the equator and the pole, which may also reflect climate warming. The study sheds light on the complexity of flood processes in north-western Europe; on the Atlantic coasts of Western Europe, 'winter' floods in fact typically occur earlier, in the autumn, as maximum soil moisture levels are now reached earlier in the year. In parts of the Mediterranean coast, flood events occurring later in the season are aligned with the warming of the Mediterranean.

"The timing of the floods throughout Europe over many years gives us a very sensitive tool for deciphering the causes of floods," says Guenter Bloeschl. "We are thus able to identify connections that previously were purely speculative."

The advances in flood research have been made possibly by an ERC Advanced Grant awarded to Guenter Bloeschl in 2012, which allowed him to establish numerous international co-operations across Europe and thus closely examine the connection between climate and floods. 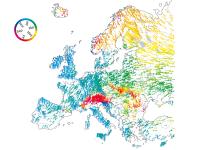