Neural progenitor cells (NPC) derived from congenital Zika syndrome (CZS) affected and non-affected twins show different rates of virus infection and different RNA expression of genes associated to neural development. The expression imbalance happens even before the infection with the Zika virus in vitro. These results confirm the hypothesis of a genetic or epigenetic influence on susceptibility to CZS and microcephaly. The findings were published in Nature Communications on Friday, 2 February 2018.

The researchers, lead by dr. Mayana Zatz and Maria Rita Passos-Bueno - geneticists from the Human Genome and Stem Cell Research Center from the University of São Paulo (USP) -, also concluded that a single gene cannot explain the cases of CSZ development nor the brain resistance to Zika virus.

About 6% to 12% of the babies born from mothers infected with the Zika virus during pregnancy will have the CZS. Why not all of them are affected by the syndrome is yet to be explained. This study shed lights on the genetic components associated to it.

"If the baby has these genetic susceptibility factors, we believe he will not have microcephaly unless he is infected by the Zika virus. Maybe we can identify these people and prioritize them in a future vaccine strategy", says dr. Mayana Zatz.

Twins as a clue to genetic studies

Twins provide unique information to answer whether a certain condition has an environmental or a genetic cause. If genetic factors are determinant to a congenital disease, there must be more concordance between the pair of identical (monozygotic) twin babies than between the non-identical or dizygotic twins. Identical siblings should be more often both affected, than dizygotic twins that will be more likely "discordant" (one affected and one non-affected).

If the environment leads to the condition, the pattern observed in the two siblings of non-identical will be the same as observed in identical twins. It means that either none of the siblings will be affected, or both, or just one of them, independently of being monozygotic or dizygotic.

The study started in 2016, during Zika epidemics in Brazil. Mayana Zatz and her team looked for twins in which at least one baby had microcephaly. They accomplished to get in touch with families from 9 pairs of twins from 6 Brazilian states.

From these babies, three pairs of non-identical, discordant twins had their blood samples collected and used to generate human induced pluripotent stem cells (hiPSC) - cells that can produce almost any other type of cell. Later, the hiPSC were transformed into neural progenitor cells (NPC) - these can lead to the cells that form the brain and other parts of the central nervous system.

The NPCs were infected with a Brazilian Zika virus strain. After four days, the plaques with cells derived from the affected babies had significanlty less cells than the plaques from the non-affected ones. Analysis of neurospheres - cells grown in 3D structures - showed similar growth impairment from the affected twins' cells. Non-infected cultures from affected and non-affected derived NPCs used as control presented no differences after the same time.

Using a fluorescence technique, researchers observed a larger amount of Zika virus in cells derived from affected babies compared to the cells from the healthy ones. More experiments pointed that the neural progenitor cells from babies with the syndrome produced significantly more viral RNA copies and more viral unities capable of infection. In short, they were more infected and did not proliferate as much as the cells from their protected siblings.

"In the laboratory, the cells mimicked what happened with the babies. Also, the results were the same for the three pairs of twins. We demonstrated that the infection is not random. It reinforces our hypothesis of a genetic component increasing the susceptibility to congenital Zika syndrome", says dr. Zatz.

In order to identify this possible genetic component, the team analyzed all the gene sequence from 8 pairs of twins and 10 other babies that developed the Zika syndrome as compared to normal controls. The exome analysis did not identify one gene variation capable of determining, alone, the susceptibility to the infection - instead, it excluded this possibility.

The RNA sequencing came next. It allows scientists to measure gene expression - which genes are silenced or which are activated and sending messages to produce proteins in the cell. This is different from the previous DNA sequencing,that shows how genes are but not how they express themselves

The RNA test from the 6 twins indicated a group of genes capable of distinguishing the more susceptible cells from the more resistant ones. The largest alteration occurred with DDIT4L gene, 12.6 times less expressed in the affected cells. Its related protein is an inhibitor of mTor signaling - a pathway involved in cell growth and cell death. Previous studies associated the mTor pathway and Zika virus replication.

The RNA sequencing also detected lower expressions of FOXG1 and LHX2 genes in the cells from babies with CZS. These genes participate in the brain regionalization process - characterized by the development of cerebral areas during fetus growth. FOXG1 has also been linked to congenital brain disorders. The LHX2 gene, 9,6 times less present in affected cells, is responsible for attenuating the Wnt signaling, engaged in neural differentiation.

In conclusion, the results indicate that the development of the Zika syndrome in babies is not aleatory, it depends on neural progenitor cells susceptibility. It is possibly related to variants in several genes or to mechanisms that control gene expression and protein production.

This study was supported by grants from FAPESP, CNPq and AACD.

For news media only:

Suggested figures to be found in the article

For the first time in humans, Zika syndrome susceptibility linked to genetic background 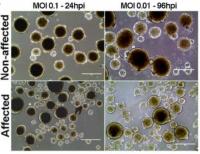 Cells Derived From Babies Born With the Congenital Zika Syndrome