Pteropods, or "wing-footed" sea snails and slugs, may be more resilient to acidic oceans than previously thought, scientists report.

By digging into their evolutionary history, the research team found that pteropods are much older than expected and survived past crises when the oceans became warmer and more acidic.

Their findings, published on the 24th September 2020 in Proceedings of the National Academy of Sciences of the United States of America (PNAS), are a surprising turn of events, as these beautiful and enigmatic marine creatures are currently one of the most adversely affected by ocean acidification.

"Pteropods have been infamously called the "canaries in a coal mine" - they act as an early warning signal for increased ocean acidity," said senior author Dr. Ferdinand Marlétaz, who is visiting faculty at the Okinawa Institute of Science and Technology Graduate University (OIST) and a former postdoctoral researcher in the OIST Molecular Genetics Unit, led by Pr. Daniel Rokhsar.

Ocean acidification is one of the consequences of human-induced climate change and occurs when increasing levels of carbon dioxide in the atmosphere dissolve into the ocean, reacting with water to form carbonic acid. Acidic oceans detrimentally impact marine creatures in countless ways, from triggering coral bleaching to preventing marine organisms from building and maintaining their shells and skeletons.

Pteropods are particularly vulnerable due to their aragonite shell, which over time has evolved to be thin and light-weight to suit their planktonic lifestyle. Aragonite is a highly soluble form of calcium carbonate. Dr. Marlétaz explained: "When conditions in the ocean are too acidic, these fragile shells can completely dissolve, and they die. So, pteropods will likely be seriously threatened as oceans acidify."

This is an issue as pteropods play an important role in the ocean's ability to capture carbon as they use carbon dioxide to form their calcium carbonate shell. Pteropods are also commonly found in planktonic communities, so their loss could upset the delicate balance of the food webs in the open ocean.

Many experimental studies are already testing the ability of pteropods to adapt to oceans with higher levels of carbon dioxide, but so far, little is known about their evolutionary history and how they might have responded to global changes in the past.

To uncover their evolutionary history, Dr. Katja Peijnenburg from the Naturalis Biodiversity Center and the University of Amsterdam, pteropod expert and lead author of the study, collected samples of 21 different pteropod speciesfrom the Atlantic Ocean. The team then used these preserved samples to extract genetic information on 2654 genes. The researchers also included genetic data from three other species of pteropods and three species of sea slugs and snails that were closely related to pteropods.

The scientists analyzed similarities and differences in the protein sequences of the genes shared across the species to construct an evolutionary tree. By calibrating the tree against pteropod fossils of a known date, the researchers could then calculate not only how, but when the main pteropod lineages diverged from a common ancestor to form new species.

"We found that the origin of the pteropods dated back to the early Cretaceous period when the main lineages of sea butterflies and sea angels diverged from each other, with the other main lineages splitting apart in the mid to late Cretaceous. This was much longer ago than previous molecular data had suggested and predates the oldest known fossils," said Dr. Marlétaz.

Unlike the majority of species then present on earth, pteropods survived the asteroid strike at the end of the Cretaceous period around 66 million years ago which infamously wiped out the dinosaurs.

But more importantly, pteropods also overcame the challenges of the Paleocene Eocene Thermal Maximum, a period about 55.5 million years ago where massive amounts of carbon dioxide released into the atmosphere caused the earth to warm and the oceans to acidify.

"The Paleocene Eocene Thermal Maximum was a period of crisis that was very similar to current changes we are seeing today," said Dr. Marlétaz. "These findings offer some hope that over evolutionary timescales, pteropods are able to adapt and acclimatize to changes in ocean temperature and acidity."

However, Dr. Marlétaz also offered a word of caution. He explained that just because pteropods survived previous increases in ocean acidity, does not mean that they are necessarily resilient to the climate crisis occurring today.

"What is striking with the changes we see now is that they are happening at a much more dramatic pace than previous events," he said. "The main groups of pteropods have shown a robustness and ability to adapt over longer timescales, but the quicker the changes, the less chance these creatures have." 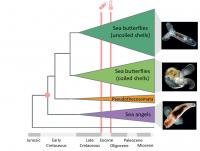