CORVALLIS, Ore. - A collection of fossilized owl pellets in Utah suggests that when the Earth went through a period of rapid warming about 13,000 years ago, the small mammal community was stable and resilient, even as individual species changed along with the habitat and landscape.

By contrast, human-caused changes to the environment since the late 1800s have caused an enormous drop in biomass and "energy flow" in this same community, researchers reported today in Proceedings of the National Academy of Sciences.

The dramatic decline in this energy flow - a measurement of the energy needed to sustain the biomass of this group of animals for a given amount of time - shows that modern ecosystems are not adapting as well today as they once did in the past.

While climate change is one part of this problem, researchers at Oregon State University and the University of New Hampshire have found that changes in land cover have been far more important in the last century. A particular concern is the introduction and expansion of invasive, non-native annual grasses at the expense of native shrublands. The end result, they say, is the transformation of the Great Basin into an ecosystem that is distinct from its 13,000-year history.

The study is the first of its type to track an ecosystem-level property, energy flow, over many thousands of years, and is ultimately based on the study of owl vomit - little pellets of undigested bones, hair, and teeth that owls regurgitated over millennia into Homestead Cave near the Great Salt Lake. These pellets contain the remains of owls' prey, mostly mammals which are smaller than a house cat.

"These owl pellets provide a really spectacular fossil record that allow us to track biologic changes continuously through thousands of years," said Rebecca Terry, an assistant professor in the College of Science at Oregon State University.

"They show a dramatic breakdown in ecosystem behavior since the late 1800s, in a way that doesn't parallel what happened when major climatic warming took place at the end of the last Ice Age," she said. "The current state is driven by human impacts to habitat, and these impacts have been a stronger force in shaping the mammal community over the last century than just climate change."

As the last Ice Age ended in this region, vast lakes dried up, and vegetation made a transition from forests and sagebrush steppe to desert shrublands. But throughout these major environmental changes, Terry said, the "energy flow" stayed just about constant - as one group of animals would decline, another group would naturally rise and take its place.

Since the late 1800s, another episode of rapid warming is underway, but the reaction of the system has been very different.

"Species distributions change over time, and that's not necessarily bad in itself," Terry said. "But this research shows that ecosystem level properties, which are often assumed to stay relatively stable even when perturbations happen, are now changing as well. The ecosystems are losing their natural resilience, the ability of one group of species to compensate for the loss of another."

A major impact since the late 1800s has been the introduction of invasive cheatgrass that displaces native bunchgrass and desert shrub habitats, while increasing fire frequency, the researchers said. They show this invasion has also caused an observed shift in the composition and structure of the small mammal community, moving it towards small, grass-affiliated species, while larger shrub-affiliated species have declined.

Cheatgrass thrives on disturbance, and much of this region is now impacted by this exotic annual grass. Many human activities have facilitated its spread, including livestock grazing which was historically intense, establishment of mining camps and railroads, and an increase in fires, the researchers said. The Great Basin is now one of North America's most threatened ecosystems.

"For conservation and management it is important to understand when, how, and why the responses of animals today differ from times of environmental change in the past," said Rebecca Rowe, an assistant professor of natural resources and the environment at the University of New Hampshire. "The fossil record allows us to do just that."

Studies such as these provide a window into natural baselines prior to the onset of human impacts in the last century. The effects of human land use on ecosystems can then be separated from the forces of climate change today. 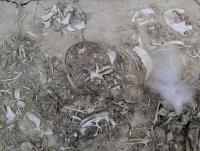