From tattoos to video games to Game of Thrones, medieval iconography has long inspired fascination, imitation and veneration. Now, thousands of original medieval manuscript and early modern images are available for free online, for scholars and aficionados to search, download and study.

Led by Lehigh University, a partnership of 15 Philadelphia-area libraries has scanned and digitized more than 160,000 pages from 475 original manuscripts, the earliest dating to the ninth century. The hand-lettered and illustrated pages range from brightly hued, gold-leafed illuminated works of art to functional texts intended for students of science, philosophy and religion.

The pages were digitized and cataloged through a three-year collaborative project of the Philadelphia Area Consortium of Special Collections Libraries (PACSCL). The project was funded by a $499,086 grant on the consortium's behalf to Lehigh University from the Digitizing Hidden Special Collections and Archives: Enabling New Scholarship Through Increasing Access to Unique Materials initiative of the Council on Library and Information Resources, supported by The Andrew W. Mellon Foundation.

The recently completed project is called Bibliotheca Philadelphiensis: Toward a Comprehensive Online Library of Medieval and Early Modern Manuscripts in PACSCL Libraries in Eastern Pennsylvania and Delaware. With the leadership of Lehigh, Free Library of Philadelphia and University of Pennsylvania Libraries, the consortium has virtually made available nearly all the region's medieval manuscripts, including descriptive metadata, which have been released into the public domain and are easily downloadable at high resolution. Users can view, download and compare manuscripts in nearly microscopic detail. It is the nation's largest regional online collection of medieval manuscripts.

"Response to the project has been enthusiastic, both among the special collections community and the medieval studies community," said Lois Fischer Black, curator of special collections at Lehigh and principal investigator of the project. "Scholars are discovering connections and relationships among manuscripts held in the PACSCL member collections that were not immediately obvious, opening new avenues for the study of provenance, scribal practice and related issues."

A researcher shared that she had been working with blurry black-and-white photocopies prior to digitization of one manuscript, which was a difference of "night and day." Others said the access and quality opened up a whole new world for medieval scholars.

The images and metadata are hosted by the University of Pennsylvania Libraries' OPenn manuscript portal and are also available through the Internet Archive.

Viewers can download material by page, manuscript or collection. Descriptive text includes both the subject of the image and text, as well as other manuscript features, such as doodles, notes or an outline of eyeglasses left inside a book. Databases are searchable by keyword. For example, viewers can pull up illuminations featuring birds, castles, dogs or religious figures, or search by book title, geography or institution.

The effort focuses primarily on Western European texts, with topics ranging from religion and philosophy to science, math, alchemy, astronomy and family lineages. The project has even made it possible to potentially virtually reassemble 1,800 pages belonging to texts whose leaves or incomplete manuscripts have been scattered around the world.

Lehigh contributed 27 manuscripts amounting to about 5,000 pages to the online collection. Among Lehigh's holdings are a 1462 handwritten copy of Virgil's Aeneid with penciled sketches in the margins, and several richly illuminated Books of Hours, Christian prayer books popular in the Middle Ages. One, known as Lehigh Codex 18, contains 13 vibrantly handpainted miniatures likely produced in France in the early 16th century, that previously were unpublished.

Some of Lehigh's holdings have been requested numerous times by researchers around the world, including one that is in Catalan and another that is Dutch in origin, Black said. "We weren't in a position to digitize these manuscripts before," due to staffing and need for sophisticated equipment, Black said. "It is with the funding for this entire project that has enabled us to make them widely available and satisfy the needs of researchers around the globe."

Lehigh, which contracted with an outside firm to digitize the works, both scanned its own collection and served as the project's fiscal agent. Lehigh also created a non-publicly accessible "dark archive" of the project's images and metadata, providing a critical backup.

Lehigh is lending material to two exhibits taking place in Philadelphia in coming months, one an exhibit at University of Pennsylvania on "Making the Renaissance" in February-May 2020 and the other on "Reflections of Medieval Life" at Philadelphia Free Library in March-June 2020.

Scholars from the Schoenberg Institute of Manuscript Studies at Penn Libraries cataloged the manuscripts, a majority of which are housed at the Free Library of Philadelphia.

Throughout the project and since its completion, scholars and fans have followed along via PACSCL's website and social media channels, including its Tumblr blog and Twitter (@pacscl and #bibliophilly), where posts highlight features of the collection. A PACSCL blog on "52 Discoveries from the BiblioPhilly Project" shares updates on ongoing findings brought to light via the online library, ushering medieval revelations into the digital age.

For more information about the project, contact Lehigh Libraries' Special Collections at inspc@lehigh.edu. 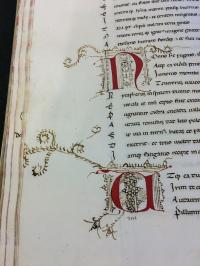