Researchers at the University of Missouri have found that pop music lyrics contain the same amount of violent content as rap and hip-hop. Because pop music is one of the most popular genres among young teens and adults, song lyrics have the potential to impact their behavior and expectations for their social life. Unlike hip-hop and rap music, which get the bulk of public criticism for harsh lyrics, antagonistic lyrics in pop music might be harder for listeners to pinpoint. The researchers suggest that parents can help their children and teens unpack tricky lyrics by having discussions about what they hear on the radio.

"We know that music has a strong impact on young people and how they view their role in society," said Cynthia Frisby, professor in the Missouri School of Journalism. "Unlike rap or hip-hop, pop music tends to have a bubbly, uplifting sound that is meant to draw listeners in. But that can be problematic if the lyrics beneath the sound are promoting violence and misogynistic behavior."

A few examples of popular pop songs that contain veiled references to violence or sexual behavior include:

"Love the Way You Lie" by Eminem and Rihanna. The song has themes of domestic abuse and violent behavior in retaliation.

"Wake Up Call" by Maroon 5. The song tells the story of a man shooting his girlfriend's lover after finding them together.

"Hollaback Girl" by Gwen Stefani. Fans of this popular track from 2004 might be surprised to know the song is actually about a physical fight between girls on a track at school.

Frisby and Elizabeth Behm-Morawitz, an associate professor and assistant vice provost for graduate and postdoctoral affairs in MU's Office of Graduate Studies, analyzed the lyrics of more than 400 top Billboard songs released between the years of 2006 to 2016 for themes of violence, profanity, misogyny and gender-role references. The songs represented a wide array of genres, including rap, hip hop, rock, pop, country, heavy metal and R & B. She found that while rap and hip-hop continues to be the leader in promoting profanity, violence and misogyny, pop music promotes violence at a similar level. On the other hand, country music had the least amount of violent and misogynistic content. Frisby also found that nearly one-third of the popular songs contained references that degrade or demean women by portraying them as submissive or sexually objectified.

Frisby suggests that parents can help their children and teens unpack tricky lyrics in these songs by having discussions with them about what they are hearing and how their life choices do not need to match a celebrity's choices.

"Ask your daughters and sons what songs they like to listen to and have conversations about how the songs might impact their identity," Frisby said. "For example, many songs might make young girls feel like they have to look and act provocative in order to get a boy to like them, when that isn't necessarily the case. If children and teens understand that what they are hearing isn't healthy behavior, then they might be more likely to challenge what they hear on the radio."

"Undressing the words: prevalence of profanity, misogyny, violence, and gender role references in popular music from 2006-2016," was published in Media Watch. 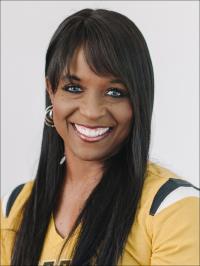