Jumping spiders were already known to see in remarkably high resolution, especially considering that their bodies are less than a centimeter long. Now, researchers reporting in the Cell Press journal Current Biology on May 18 have figured out how spiders in the colorful genus Habronattus see in three color "channels," as most humans do.

"The eyes of jumping spiders could not be more different from those of butterflies or birds, and yet all three tune the color sensitivities using pigments that filter light," says Nathan Morehouse of the University of Pittsburgh. "It's actually a pretty clever, simple solution with a big payoff."

The "spectral filtering" the researchers discovered had never before been described in any spider. That makes this visual strategy a remarkable example of evolutionary convergence.

Spiders have four pairs of eyes that pick up on different aspects of their surroundings. The new study shows that their "principal eyes" see in red, green, and UV. Their secret is a filter that converts some green-sensitive cells in their eyes to seeing red, much like a pair of sunglasses.

They may have "true" color vision, but that's not to say the spiders see the world in quite the way we do. "One fascinating thing about the trichromatic area in these spiders' retinas is that it is very restricted in field of view, which means they'd have to scan scenes 'line by line' to accumulate color information," says Daniel Zurek, also of the University of Pittsburgh.

Earlier behavioral tests done in the Morehouse lab showed that the spiders could see in color. In the new study, the researchers carefully examined structures within the spiders' eyes to understand how.

With the new findings in hand, the researchers say they are about to go spider hunting in Arizona in search of members in this diverse Habronattus group, in which males are adorned with especially flamboyant color patterns. They hope to explore the role that color vision may have played in generating the diversity of those spiders over evolutionary time. 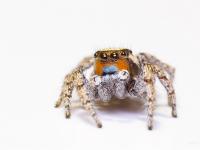 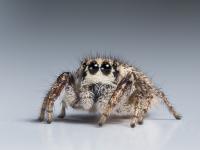