A Brazilian study published April 26 in the journal Cancer Research shows for the first time in vivo that Zika virus can be used as a tool to treat aggressive human central nervous system (CNS) tumors.

After injecting small amounts of the pathogen into the brains of mice with an advanced stage of the disease, the scientists observed a significant reduction in tumor mass and an increase in survival. In some cases, the tumor was completely eliminated, even where the disease had metastasized to the spinal cord.

"We're excited about the possibility of testing the treatment in human patients, and we're already discussing this with oncologists. We've also applied for a patent for the therapeutic protocol used in rodents," said Mayana Zatz, a professor in the University of São Paulo's Bioscience Institute (IB-USP) in Brazil and director of the Human Genome & Stem Cell Research Center (HUG-CELL), one of the Research, Innovation and Dissemination Centers (RIDCs http://cepid.fapesp.br/home) supported by the Sao Paulo Research Foundation - FAPESP.

Zatz led the study alongside Oswaldo Keith Okamoto, also a professor at IB-USP and a member of HUG-CELL. The research team included scientists at Butantan Institute, Brazil's National Bioscience Laboratory (LNBio) and the Federal University of de São Paulo (UNIFESP).

"Our results suggest Zika has an even greater affinity with central nervous system tumor cells than with healthy neural stem cells [the virus's main targets in the brains of fetuses exposed during pregnancy]. When it infects tumor cells, it swiftly destroys them," Okamoto said.

In his laboratory at IB-USP, Okamoto has devoted the last few years to studying a group of genes which, when expressed in malignant tumors, endow tumor cells with properties similar to those of stem cells, making them more aggressive and treatment-resistant.

According to Okamoto, these tumor cells with stem cell-like characteristics have been observed in various kinds of solid tumor including those that affect the central nervous system. Data in the scientific literature suggests they help cancer spread through the organism and restore tumor growth after chemotherapy and radiation therapy have all but eliminated the disease.

"Our research and studies by other groups have shown that Zika virus causes microcephaly because it infects and destroys neural stem cells in the fetus, preventing the formation of new neurons. So we had the idea of investigating whether the virus also attacked tumor stem cells in the central nervous system," he said.

The study just published focused on what are known as embryonal CNS tumors. The experiments were performed with three human tumor cell lines: two derived from medulloblastoma and the third from atypical teratoid/rhabdoid tumor (AT/RT).

As Okamoto explained, both kinds of cancer are caused by genetic or epigenetic aberrations in stem cells and neural progenitors during embryonic development, when the nervous system is under construction.

"The neural stem cells that undergo these alterations give rise to tumor cells at a later stage. They form aggressive, fast-growing tumors that can manifest shortly after birth or until adolescence," Okamoto said.

In the first stage of their research, the group tested in vitro whether Zika was capable of infecting these three CNS tumor cell lines, as well as cells from other frequent types of tumor, such as breast, prostate and colorectal cancer.

The researchers performed a dose escalation study, adding steadily larger amounts of Zika virus to cultured tumor cells until they found the quantity that promoted infection. Using immunofluorescence microscopy they confirmed that the virus had in fact invaded the tumor cells and begun to replicate inside them.

"We observed that small amounts of Zika were sufficient to infect CNS tumor cells," Okamoto said. "They also infected the prostate cancer cells, but far fewer. On the other hand, even a large viral dose failed to cause infection in breast and colorectal cancer cells."

"This is very good news, since our specific goal is to destroy tumor cells," Zatz noted.

The neural stem cells used in the experiment, she explained, were obtained during a previous study conducted by the group with pairs of discordant twins - cases in which only one twin was affected by the virus although both had been equally exposed during pregnancy.

According to Okamoto, the AT/RT cell line was the most sensitive to infection.

"We analyzed the genetic and molecular profile of these cell lines very thoroughly. This analysis included whole exome sequencing [to look for disease-causing variants in exons, the pieces of genes that code for proteins], global gene expression and chromosome alterations," he said. "We concluded that this tumor cell line was not only more sensitive to the virus than the others but also more closely resembled the molecular characteristics of healthy neural stem cells."

The group's preliminary results suggest Zika can also infect and destroy other kinds of CNS tumor such as glioblastoma and ependymoma.

In the third and last part of the project the researchers conducted in vivo assays with immunosuppressed mice, injecting human tumor cells from medulloblastoma and AT/RT into different groups.

In this study model, the tumor is induced in the lateral ventricles of the brain, spreads to other regions of the central nervous system and then descends the spinal cord, mimicking advanced human cancer.

After inducing the tumor, the researchers injected a small dose of Zika into the lateral ventricles of some mice.

"Tumor volume was significantly reduced in the treated group. In some cases both the tumor and spinal metastases were completely eliminated," Okamoto said.

"Even when the tumor was completely eliminated the animals eventually died from complications of advanced-stage cancer," Okamoto said. "It's possible survival rates could become even longer if patients are treated at an earlier stage. This is something we need to investigate."

The researchers also injected the virus into a group of immunosuppressed mice that did not have induced cancer. In this case, the virus circulated for longer in the organism and the animals died from the viral infection after only two weeks.

"Immunosuppressed mice are highly sensitive to any pathogen, but we had to use this model because it's the only one in which human tumor cells are capable of proliferating," Okamoto explained.

When they sought to find out why the virus was more lethal in the animals without cancer than in the sick animals, the researchers discovered that the viral particles created when Zika infected the tumor cells were less virulent, meaning they were less able to infect new cells than particles created in healthy cells.

"All these results taken together suggest that various kinds of aggressive CNS tumors can be treated with some kind of approach involving Zika in future," Okamoto said. "First of all, however, we need to investigate more profoundly which tumor types respond to this oncolytic effect, what are the benefits of this treatment, and what are the side-effects of exposure to the virus."

In parallel with development of the theoretical research in the laboratory, Zatz added, the group plan to move on to clinical trials in humans. "Today there are few options for treatment of these tumors," she said. "The idea is to start with two or three patients who don't respond to conventional treatment, and then embark on a larger trial with more patients."

According to Zatz, the fact that thousands of Brazilians were infected by Zika during the 2015 epidemic suggests the procedure is sufficiently safe. "Some 80% of the people infected have never displayed symptoms. Most of the other 20% have displayed mild symptoms far less aggressive than those of dengue or the adverse effects of chemotherapy," she explained.

Zatz stressed the importance of FAPESP's RIDC program in making this kind of research feasible. "It enables researchers with different kinds of expertise to collaborate and get results very quickly, which can make all the difference," she said. 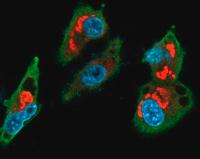