Six studies highlight new and unexpected insights into Ceres, a dwarf planet and the largest object in the asteroid belt (between Mars and Jupiter). The results, derived from data from the Dawn spacecraft in orbit around Ceres, reveal that it has craters, cracks, cryovolcanos and other markers of geological processes. Together, these studies provide a much-improved understanding of Ceres, a world of rock and ice.

Previously, scientists have suggested that certain bodies in space could host volcanic activity, based on observed molten ices. However, evidence of such ice volcanos - called cryovolcanos - has remained elusive until now. Based on their analysis of Dawn imaging data, Ottaviano Ruesch and colleagues argue that they have identified a cryovolcanic formation on Ceres, named Ahuna Mons. The dome-shaped mountain has an elliptical base and a concave top, as well as other properties that indicate cryovolcanism. The authors applied models to determine the age of Ahuna Mons, finding it to have formed after the craters surrounding it, which suggests that it came into existence relatively recently. There is no evidence for compressional tectonism, nor for erosional features, the authors say; it appears that extrusion is a main driver behind the formation of Ahuna Mons. Although the exact material driving the cryovolcano cannot be determined without further data, the authors propose that chlorine salts, which have been previously detected in a different region of Ceres, could have been present with water ice below Ceres' surface and driven the chemical activity that formed Ahuna Mons.

In a second study, Jean-Philippe Combe et al. describe the detection of water ice - exposed on the surface of Ceres. The dwarf planet was known to contain water ice, but water ice is also expected to be unstable on its surface, so scientists were unsure whether it could be detected there. They used the Visible and InfraRed (VIR) mapping spectrometer onboard the Dawn spacecraft to analyze a highly reflective zone in a young crater called Oxo, on five occasions during 2015. The data reveal water-containing materials in an area covering less than one kilometer squared, which most likely is water ice, the authors say, although hydrated minerals are also a possibility. Given the conditions on Ceres, water ice should be removed from the surface within tens of years; consequently, only a relatively recent exposure or formation of water would explain Dawn's findings. The authors propose several explanations for how this water appeared on Ceres' surface, saying the most plausible is exposure of near-surface, H2O-rich materials from an impact or local landslide.

In a third study, Christopher Russell, the principle investigator of the Dawn mission, and colleagues, discuss the unexpected detection of energetically charged solar particles at Ceres. The Dawn Gamma Ray and Neutron Detector (GRaND) instrument detected rapid bursts of solar wind interacting with the dwarf planet. The authors propose two possible explanations for the wind: most likely, the dwarf planet has a weak atmosphere that was ionized by the energetic particles in the solar wind, producing a bow shock as the solar wind was deflected. Another, less likely, possibility is that a salty interior for the planet drives an electric current there, creating a magnetic field that would deflect the solar wind, the authors say.

A study by Harald Hiesinger et al. analyzes the craters on Ceres, using imaging data from the Framing Camera (FC) on board Dawn. The asteroid was previously thought to have a layer of ice just below the surface. If Ceres contains such an ice-dominated layer, it was predicted that even small craters would "relax" within 10 to 100 million years, but this is not consistent with Dawn observations of the depths and shapes of the craters. Those analyses indicate that Ceres' outer shell is neither pure ice nor pure rock, but a mixture between the two. By counting the number and size of craters on the surface, the authors were also able to date various regions on the dwarf planet's surface.

In a separate study, Debra Buczkowski et al. highlight the diverse types of formations observed on Ceres, including craters, domes, lobate flows and linear structures. While some of these features are caused by impacts, others hint at geological processes such as subsurface faulting. Some features seem to be formed by cryomagmatism or cryovolcanism processes, driven by molten ice from beneath the surface. The authors also note that patterns in the structures identified on the surface of Ceres are suggestive of salt upwelling.

Finally, in a sixth study, Eleonora Ammannito and colleagues analyze the distribution Ceres' clay-like phyllosilicate minerals, which contain magnesium and ammonium. The researchers used the visible and infrared mapping spectrometer onboard Dawn to determine that that the composition of these phyllosilicates across Ceres is fairly uniform, but that their abundance varies. Because these minerals require the presence of water to form, the authors propose that widespread and extensive aqueous alteration processes have affected the dwarf planet at some point in its history.

Dawn Spacecraft at Ceres: Craters, Cracks, and Cryovolcanos (2 of 3) 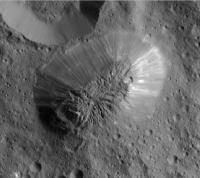 Dawn Spacecraft at Ceres: Craters, Cracks, and Cryovolcanos (3 of 3)