Kirigami (also called "paper-cuts" or "jianzhi") is one of the most traditional Chinese folk arts. It is widely used in window decorations, gift cards, festivals, and ceremonies, etc. Kirigami involves cutting and folding flat objects into 3D shapes. Recently, the techniques of this ancient art have been used in various scientific and technological fields, including designs for solar arrays, biomedical devices and micro-/nano- electromechanical systems (MEMS/NEMS).

Inspired by a traditional Chinese kirigami design called "pulling flower," the team developed a direct nano-kirigami method to work with flat films at the nanoscale. They utilized a focused ion beam (FIB) instead of knives/scissors to cut a precise pattern in a free-standing gold nanofilm, then used the same FIB, instead of hands, to gradually "pull" the nanopattern into a complex 3D shape.

The "pulling" forces were induced by heterogeneous vacancies (introducing tensile stress) and the implanted ions (introducing compressive stress) within the gold nanofilm during FIB irradiation.

By utilizing the topography-guided stress equilibrium within the nanofilm, versatile 3D shape transformations such as upward buckling, downward bending, complex rotation and twisting of nanostructures were precisely achieved.

While previous attempts to create functional kirigami devices have used complicated sequential procedures and have been primarily aimed at realizing mechanical rather than optical functions, this new nano-kirigami method, in contrast, can be implemented in a single fabrication step and could be used to perform a number of optical functions.

In this way, the team demonstrated a multidisciplinary connection between the two fields of nanomechanics and nanophotonics. This may represent a brand new direction for emerging kirigami research.

The team also developed a theoretical model to elucidate the dynamics during the nano-kirigami fabrication. This is of great significance since it allows researchers to design 3D nanogeometries based on desired optical functionalities. In contrast, previous studies relied heavily on intuitive designs.

In other words, in terms of geometric design, nano-kirigami offers an intelligent 3D nanofabrication method beyond traditional bottom-up, top-down and self-assembly nanofabrication techniques.

Its concept can be extended to broad nanofabrication platforms and could lead to the realization of complex optical nanostructures for sensing, computation, micro-/nano- electromechanical systems or biomedical devices.

This work, entitled "Nano-kirigami with giant optical chirality," was published in Science Advances on July 6, 2018. 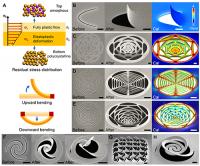 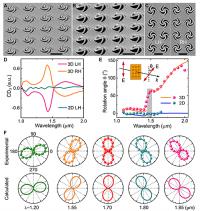