MBL, WOODS HOLE, MA—The ubiquitous freshwater "water flea," Daphnia pulex, may be too small to see, but it has amply proven its value as an "sentinel species" for the presence of toxins and pollutants in the environment.

Daphnia's response to exposure to toxic metals and other chemical pollutants is well studied, and this information is routinely used by groups such as the US Environmental Protection Agency (EPA) to define regulatory limits, and to monitor industrial and municipal discharges.

This week, Daphnia pulex is receiving an enormous pat on the back from the scientific community: It is the first crustacean to have its complete genome sequenced. The sequence is being published Friday in Science magazine by members of the Daphnia Genomics Consortium, an international network of scientists led by the Center for Genomics and Bioinformatics at Indiana University-Bloomington and the Department of Energy's Joint Genome Institute.

Joshua Hamilton, senior scientist and chief academic and scientific officer at the Marine Biological Laboratory (MBL) in Woods Hole, Mass., is co-author of an important companion paper to the Daphnia genome sequence. That paper, published in 2007, was the first study of the genetic basis for Daphnia's adaptive response to sub-lethal levels of a major environmental contaminant, the metal cadmium. Cadmium, which is highly toxic to aquatic life (and to humans), is one of the most common contaminants found in the U.S. EPA Superfund sites.

The technologies described in the 2007 paper (cDNA microarrays) were the first genomic tools developed for Daphnia and they are applicable to testing Daphnia's genetic response to a wide range of environmental contaminants. Subsequently, many other environmental stressors have been tested using Daphnia.

"Daphnia can serve as an important 'canary in a coal mine' for freshwater ecosystems and their response to environmental contamination," says Hamilton. "When the Daphnia population is impacted, it is likely that the entire ecosystem is being adversely affected and may be on the verge of collapse."

Hamilton, then at Dartmouth Medical School, and colleagues at Dartmouth and Indiana University demonstrated that Daphnia can adapt to increasing levels of cadmium by up-regulating a unique version of a key protective molecule called metallothionein, but at a very high cost. Although the individuals could resist the high levels of cadmium and survive, their reproductive success plummeted to a fraction of that of animals in uncontaminated waters, which after only a few generations threatened the entire population's long-term survival.

"Until now, Daphnia has primarily been used as sentinel species for monitoring the integrity of aquatic ecosystems," says Joseph Shaw, co-author of the cadmium study (as a former postdoctoral fellow with Hamilton), co-author of the new Science paper, and now a biologist at Indiana University-Bloomington's School of Public and Environmental Affairs. "But with many shared genes between Daphnia and humans, we will now also apply Daphnia as a surrogate model to address issues directly related to human health. This puts us in a position to begin integrating studies of environmental quality with research of human diseases."

To speak to Hamilton about importance of Daphnia pulex to environmental genomics, please contact Diana Kenney at 508-289-7139; dkenney@mbl.edu

Reporters may request a copy of the Colbourne paper, as well as supporting materials and Science's press package, at scipak@aaas.org

A PDF of the Shaw paper is available at: www.mbl.edu

The MBL is a leading international, independent, nonprofit institution dedicated to discovery and to improving the human condition through creative research and education in the biological, biomedical and environmental sciences. Founded in 1888 as the Marine Biological Laboratory, the MBL is the oldest private marine laboratory in the Americas. For more information, visit www.MBL.edu. 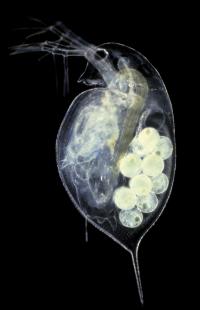