Most hummingbirds have bills and tongues exquisitely designed to slip inside a flower, lap up nectar and squeeze every last drop of precious sugar water from their tongue to fuel their frenetic lifestyle.

But in the tropics of South America, University of California, Berkeley, scientists are finding that some male hummers have traded efficient feeding for bills that are better at stabbing and plucking other hummingbirds as they fend off rivals for food and mates. The males' weaponized bills are good not only for pulling feathers and pinching skin, but also wrestling their rivals away from prime feeding spots.

Using high-speed video cameras, the researchers have for the first time captured hummingbird fencing and feeding strategies in slow motion to document the various ways the birds use their bills to fight and the trade-offs they accept when choosing fighting over feeding prowess.

"We understand hummingbirds' lives as being all about drinking efficiently from flowers, but then suddenly we see these weird morphologies - stiff bills, hooks and serrations like teeth - that don't make any sense in terms of nectar collection efficiency," said Alejandro Rico-Guevara, a Miller Postdoctoral Fellow at UC Berkeley and the lead scientist on the project. "Looking at these bizarre bill tips, you would never expect that they're from a hummingbird or that they would be useful to squeeze the tongue."

Straighter bills are better for poking, which may explain why in some species females have curved bills to sip inside the curved bells of flowers but the males' beaks are less curved. This has sometimes forced the males to feed on different flowers than the females, ones more adapted to a straighter beak.

Rico-Guevara acknowledged that hummingbirds have long been known as fierce fighters - they even attack hawks, owls and other birds if they perceive a threat - but the fights happen so fast that scientists haven't been able to see the actual outcome.

"Because it happens so fast and they fly away, you can't track them," he said. "But also, people haven't actually looked at the details of the beaks. We are making connections between how feisty they are, the beak morphology behind that and what that implies for their competitiveness."

Rico-Guevara is the lead author of a paper describing how the shape of the bill affects hummingbird feeding and fighting strategies in the January 2019 issue of the journal Integrative Organismal Biology.

Rico-Guevara has been photographing and videotaping hummingbirds for more than a decade, often in the lush forests of his native Colombia, to understand how they have adapted to specialized niches. Some hummers, for example, feed on only one type of flower, a result of the flower and bird having evolved together. In some cases, a bird's beak won't fit in any other flower, while that flower's feeding tube is shaped so that no other birds' beak can slide in to get the nectar efficiently. This relationship provides a secure source of food - nectar - for the bird and a guaranteed pollinator for the plant.

In the new paper, Rico-Guevara describes what he has discovered to date about the exquisite beak design that most hummingbirds, including North American hummers, have evolved for feeding, and the unique features of hummingbirds' forked tongues. He has shown, for instance, that their tongues are able to change shape quickly without an internal muscle, allowing them to pump and trap nectar without spending any additional energy: another stunning example of their efficiency, he said.

"Extracting nectar is what fuels their lives," he said. As a result, they have developed "very flexible bills with very soft edges, soft, blunt bill tips that are concave, like a couple of spoons, that perfectly match the tongue to squeeze out the last drop of nectar. All of these traits make a good seal between the tongue tips that actually enhances the efficiency of nectar extraction."

Yet in the tropics, including Colombia, Brazil, Peru and Costa Rica, males of many species don't fit this picture. Instead, they have stiff bills with a hard, conical, dagger-like tip, often hooked, plus rear-facing serrations like the teeth of a comb. High-speed video shows that the stiff, hard-tipped bill is ideal for poking other birds, while the hooked tip and serrations are a perfect way to snatch a feather or two. The males' wings are also adapted to be more aerodynamic - for in-flight fights - than are female wings.

The weaponized bills of these males are unsuited to efficient nectar sipping, however, Rico-Guevara said, though he does not yet have data on how much less efficient their bills are because of these types of serrations and a hooked tip.

The evolution of these unusual bills in tropical hummingbirds appears to be a result of increased competition. Elsewhere in the Americas, three or four hummingbird species may compete with one another in a given habitat; in the tropics, there could be 15.

"We have discovered that these traits may be related to a different kind of strategy: instead of feeding on a particular flower shape very well, some birds try to exclude everybody from a patch of flowers, even though they can't feed as well on them as hummingbirds without bill weapons," Rico-Guevara said. "If you are good enough at keeping your competitors away, then it doesn't matter how well you use the resources in the flowers you are defending, you have them all to yourself."

"A lek is like a singles bar, a place where many males get together and sing, sing, sing all the time," Rico-Guevara said. "The females go to these small spaces in the forest and pick a male to mate with. If you can get a seat at that bar, it is going to give you the opportunity to reproduce. So they don't fight for access to resources, like in the territorial species, but they actually fight for an opportunity to reproduce. And in the brief moments when there is no fighting, they go to feed on different flowers."

He and his colleagues are continuing to study the adaptations that accompany hummingbirds' feeding and mating strategies in Colombia and elsewhere in Latin America, including why females and many other males, who also occasionally fight one another, have not weaponized their bills.

Co-authors of the new paper are Margaret Rubega of the University of Connecticut at Storrs, UC Berkeley integrative biology professor Robert Dudley and visiting scholar Kristiina Hurme. The work was supported by the Miller Institute for Basic Research in Science. 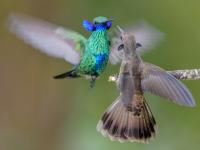