A research team led by Prof. QIAN Peiyuan, Head and Chair Professor from the Hong Kong University of Science and Technology (HKUST)'s Department of Ocean Science and David von Hansemann Professor of Science, has published their cutting-edge findings of symbiotic mechanisms of a deep-sea vent snail (Gigantopelta aegis) in the scientific journal Nature Communications. They discovered that Gigantopelta snail houses both sulfur-oxidizing bacteria and methane-oxidizing bacteria inside its esophageal gland cells (part of digestive system) as endosymbionts. By decoding the genomes of both snail host and two symbionts, Prof. Qian's team disclosed a novel dual symbiosis system and the molecular adaptation to the extreme environment, gaining a new understanding of the origin of life on Earth.

Deep-sea hydrothermal vent is characterized as extremely high hydrostatic pressure and darkness, and they can release fluids overheated by the Earth's crust, with concentrated toxic heavy metals and chemical substances. These characteristics make hydrothermal vent one of the most uniquely extreme environments on our planet. In addition, the deep-sea hydrothermal vent environment is very similar to the earth's early environment, when life began to form. Unlike most ecosystems relying on photosynthesis-derived nutrients, fauna living in vents depend on chemosynthetic microbes that can utilize chemical energy to synthesize organic compounds, supporting dense and unique macro-organisms living there. However, how the organisms thrive and adapt to such an extreme environment remains a complex puzzle.

In April and May 2019, Prof. Qian's team undertook a deep-sea research expedition and explored Longqi vent filed on the Southwest Indian Ridge with a remotely operated vehicle. They found a dominant species, Gigantopelta snails, at the sea floor (approximate 2800 m depth). Prof. Qian's team discovered two types of symbiotic bacteria with dramatically different morphologies that live inside the esophageal gland cells of Gigantopelta snails, which was further identified as one sulfur-oxidizing bacteria and one methane-oxidizing bacteria.

The team further decoded the genomes of Gigantopelta snail, sulfur-oxidizing bacteria and methane-oxidizing bacteria, unveiling a novel dual symbiosis system that are highly versatile in utilizing the chemical energy for nutrient synthesis. The sulfur-oxidizing bacteria can utilize the chemical energy from hydrogen, hydrogen sulfide, sulfate, sulfite and thiosulfate, while the methane-oxidizing bacteria can utilize hydrogen and methane. From the host side, there are more copies of pattern recognition receptors in Gigantopelta genome, and they specifically expressed in the symbiotic organ, which help Gigantopelta recognize and maintain a dual symbiosis system. Gigantopelta snails adopt a mutualistic metabolic relationship among multiple symbiotic partners and thus flourish in this vent ecosystem. These findings not only enable us to gain a better understanding of how animals thrive in such extreme environment, but also shed light on how such animals cope with microbes in a highly specialized way. 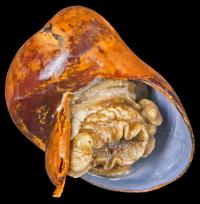 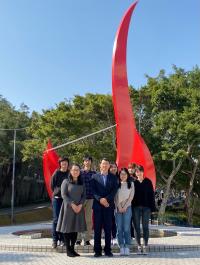