The tree of life just got a little bigger: A team of scientists from the U.S. and China has identified an entirely new group of microbes quietly living in hot springs, geothermal systems and hydrothermal sediments around the world. The microbes appear to be playing an important role in the global carbon cycle by helping break down decaying plants without producing the greenhouse gas methane.

"Climate scientists should take these new microbes into account in their models to more accurately understand how they will impact climate change," said Brett Baker, assistant professor at The University of Texas at Austin's Marine Science Institute who led the research published April 23 in Nature Communications.

The new group, which biologists call a phylum, is named Brockarchaeota after Thomas Brock, a pioneer in the study of microbes that live in extreme environments such as the hot springs of Yellowstone National Park. Sadly, Brock died April 4. His research led to a powerful biotech tool called PCR, which is used, among other things, in gene sequencing and COVID-19 tests.

"The description of these new microbes from hot springs is a fitting tribute to Tom's legacy in microbiology," Baker added.

So far, Brockarchaeota have not been successfully grown in a laboratory or imaged under a microscope. Instead, they were identified by painstakingly reconstructing their genomes from bits of genetic material collected in samples from hot springs in China and hydrothermal sediments in the Gulf of California. Baker and the team used high-throughput DNA sequencing and innovative computational approaches to piece together the genomes of the newly described organisms. The scientists also identified genes that suggest how they consume nutrients, produce energy and generate waste.

"When we looked in public genetic databases, we saw that they had been collected all around the world but described as 'uncultured microorganisms,'" said Valerie De Anda, first author of the new paper, referring to specimens collected by other researchers from hot springs in South Africa and Wyoming's Yellowstone, and from lake sediments in Indonesia and Rwanda. "There were genetic sequences going back decades, but none of them were complete. So, we reconstructed the first genomes in this phylum and then we realized, wow, they are around the world and have been completely overlooked."

The Brockarchaeota are part of a larger, poorly studied group of microbes called archaea. Until now, scientists thought that the only archaea involved in breaking down methylated compounds--that is, decaying plants, phytoplankton and other organic matter--were those that also produced the greenhouse gas methane.

"They are using a novel metabolism that we didn't know existed in archaea," said De Anda. "And this is very important because marine sediments are the biggest reservoir of organic carbon on Earth. These archaea are recycling carbon without producing methane. This gives them a unique ecological position in nature."

A phylum is a broad group of related organisms. To get a sense of just how large and diverse phyla are, consider that the phylum Chordata alone includes fish, amphibians, reptiles, birds, mammals and sea squirts. The phylum Arthropoda, which accounts for about 80% of all animals, includes insects, arachnids (such as spiders, scorpions and ticks) and crustaceans (crabs, lobsters, shrimp, and other tasty sea denizens).

In July 2020, Baker, De Anda and others suggested the possible existence of several new phyla among the archaea, including Brockarchaeota, in a review article in Nature Microbiology. This latest study adds more than a dozen new species to Brockarchaeota, describes their metabolism and demonstrates that they are indeed a distinctly new phylum.

In addition to breaking down organic matter, these newly described microbes have other metabolic pathways that De Anda speculates might someday be useful in applications ranging from biotechnology to agriculture to biofuels.

The study's co-corresponding authors are Baker and Wen-Jun Li from Sun Yat-Sen University and Southern Marine Science and Engineering Guangdong Laboratory (China). The other authors are Lin-xing Chen and Jillian F. Banfield from the University of California, Berkeley; Nina Dombrowski formerly in Baker's lab at UT Austin and now at Royal Netherlands Institute for Sea Research and Utrecht University; Zheng-Shuang Hua from Sun Yat-Sen University (China) and Dartmouth College; and Hong-Chen Jiang from China University of Geosciences. 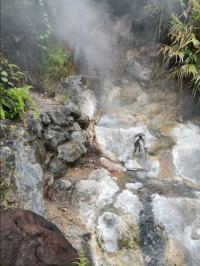