Researchers have found a way to protect threatened Darwin's finches on the Galápagos Islands from deadly parasitic nest flies in a manner that's as simple as it is ingenious: by offering the birds insecticide-treated cotton for incorporation into their nests. The study, reported in the Cell Press journal Current Biology on May 5, shows that the birds will readily weave the protective fibers in. What's more, the researchers find that just one gram of treated cotton is enough to keep a nest essentially parasite-free.

The findings come as welcome news for the future of Darwin's finches, including the mangrove finch, one of the world's most endangered birds, the researchers say. Fewer than 100 mangrove finches survive on the Galápagos today.

"These flies were recently introduced to the Galápagos, where they parasitize nearly all nesting land bird species on the islands," says Sarah Knutie of the University of Utah. "In some years, 100% of Darwin's finch nestlings die as a direct result of the parasite."

It is the fly larvae that cause the trouble. Adult flies lay their eggs in the birds' nests. When the insect larvae hatch, they feed on the blood of the nestlings and their mother. Their devastating toll on the survival of young finches has made fighting the flies a top priority for bird conservation in the Galápagos.

Knutie says she and her colleagues have used permethrin, a common insecticide, for many years to combat parasites in the nests. But they had a new idea after several finch species were seen pulling cotton fibers from laundry lines and weaving the cotton into their nests. Would the birds be willing to use permethrin-treated cotton, too?

In a separate experiment, Knutie and colleagues showed that nests sprayed with permethrin produce many more surviving nestlings. Nineteen of twenty treated nests fledged at least one offspring, while only 11 of 17 control nests fledged any offspring.

"Novel parasites and diseases are an increasing threat to our environment," Knutie says. "Many animals cannot defend themselves against such parasites. Therefore, the animals need our help in developing effective ways to protect them. Our method of self-fumigation is a simple and immediate solution that can help Darwin's finches combat this devastating parasite."

The Charles Darwin Research Station is currently in the process of testing this method for mangrove finches on Isabela Island, the largest of the Galápagos, and Knutie says she continues to advise on use of the self-fumigation method in the Galápagos. 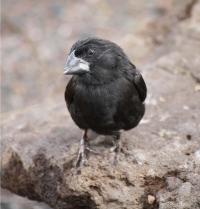