Organic chemists from the University of Groningen and the Dutch multinational company AkzoNobel, a major global producer of paints and coatings, developed a process that allows them to turn biomass into a high-quality coating using light, oxygen and UV light. This process combines a renewable source with green chemistry and could replace petrochemical-based monomers such as acrylates, which are currently used as building blocks for coatings, resins and paints. A paper on the new process was published in the journal Science Advances on 16 December.

Coatings are everywhere, from the paint on your house to a protective layer on the screen of your smartphone. They protect surfaces from scratches, influences of the weather or everyday wear. Most coatings are made up of polymers based on acrylate monomers, with the global production of acrylate exceeding 3.5 million tonnes a year, all produced from fossil oil.

To make these coatings more sustainable, scientists from the University of Groningen, led by Professor of Organic Chemistry Ben Feringa, teamed up with scientists from coating producer AkzoNobel. 'We wanted to use lignocellulose as the starting material,' says George Hermens, a PhD student in the Feringa group and first author of the paper in Science Advances. Lignocellulose makes up 20 to 30 per cent of the woody parts of plants and is the most abundantly available raw biomass material on Earth. Currently, it is mainly used as a solid fuel or used to produce biofuels.

'Lignocellulose can be cracked with acid to produce the chemical building block furfural, but this needs to be modified to make it suitable for the production of coatings,' explains Hermens. He used a process that has been developed in their group to convert the furfural into a compound, hydroxybutenolide, that resembles acrylic acid. 'The chemical conversion uses only light, oxygen and a simple catalyst and produces no waste. The only side product is methyl formate, which is useful as a replacement for chlorofluorocarbons in other processes.'

These monomers can be transformed into polymers and coatings with the help of an initiator and UV light. 'Coatings are made up of cross-linked polymer chains. By combining different monomers, we could get cross-linked polymers with different properties.' For example, while all polymers would coat glass, one combination was able to also form a coating on plastic. And by adding more rigid monomers, a harder coating was formed, with properties comparable to those of coatings on cars. In this way, these coatings are adaptable for different purposes.

'We managed to create coatings from a renewable source, lignocellulose, using green chemistry,' concludes Hermens. 'And the quality of our coatings is similar to that of current acrylate-based coatings.' For two steps in the process, patent applications have been filed with AkzoNobel, the industrial partner in the project. Hermens is now working on a different building block derived from furfural to produce other types of polymer coatings.

The project was initiated by the Advanced Research Center Chemical Building Blocks Consortium (ARC CBBC), a Dutch national public-private research centre that develops new chemical processes and chemical building blocks for novel energy carriers, materials and chemicals for sustainable chemistry. Hermens' supervisor, Ben Feringa, is one of the founders of this centre. The ARC CBBC is a national initiative with partners from industry, academia and government. There are three universities involved (Utrecht University, the University of Groningen and Eindhoven University of Technology) and major industrial partners (AkzoNobel, Shell, Nouryon and BASF), as well as the ministries of Education, Culture and Science and of Economic Affairs and Climate Policy and the Dutch Research Council (NWO). Feringa: 'The programme entails all the steps from fundamental scientific discovery to process and product development. In this long-term partnership, universities and the chemical industry join forces to develop the green chemistry of the future.' 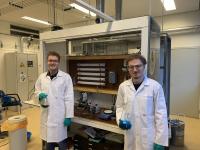