Alcoholic drinks aren't generally put into the category of health food, but in some cases they might be just the cure for nasty parasites. That's according to a study published online on February 16 in Current Biology, a Cell Press publication, showing that fruit flies will actually seek out alcohol to kill off blood-borne parasitic wasps living within them.

The discovery offers some of the first evidence that alcohol might be used to fight infection, the researchers say.

"We found that environmental alcohol protects fruit flies from being parasitized by wasps, and that, even after being infected, fruit fly consumption of alcohol leads to death of the wasps growing within them," said Todd Schlenke of Emory University. "Surprisingly, fly larvae actively seek out ethanol-containing food when infected, showing they use alcohol as an antiwasp medicine."

Wasp mothers will lay their eggs in fruit fly larvae. Their young hatchlings then eat the flies from the inside out. Fortunately for flies of the species Drosophila melanogaster, they have developed a tolerance for alcohol over evolutionary time, a necessity for a life living in and feeding on rotting and fermented fruit.

"D. melanogaster has a special ability to tolerate high levels of alcohol," Schlenke said. "It seemed possible that this ability might protect the flies from generalist parasites." In fact, those parasites might have even helped push the flies toward an alcohol-drinking existence, he added.

Indeed, the new evidence shows that ethanol exposure discourages wasps from laying their eggs in young fruit flies. When infected flies consume ethanol, it tips the balance in favor of the flies. Those flies are more likely to live and the wasps to die, even if the flies forego launching their normal antiwasp immune response.

It is tempting to think that the findings in flies might have application to other alcohol-drinking animals, including humans, the researchers say. Until now, the notion that alcohol consumption might cure human ailments—particularly stomach infections—has been the stuff of online chat sites and not the scientific literature, they note. As a simple first test, they suggest that ethanol could be added to parasite cultures in the lab to find out what sort of effect it might have.

Either way, it turns out, the findings are yet another example of the beauty and complexity of nature. "These little fruit flies, the same that hover around the brown bananas in your fruit bowl, are making complex decisions about how much alcohol to consume based on whether or not they have internal parasites," Schlenke said. "Who knows, maybe they can teach us something about how to fight off our own parasites."

To kill off parasites, an insect self-medicates with alcohol 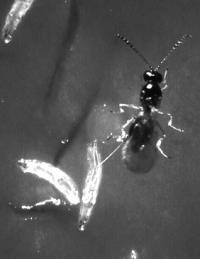 To Kill Off Parasites, an Insect Self-Medicates with Alcohol (2 of 2)