Bremerhaven, March 24th 2009. The research aircraft Polar 5 belongs to the Alfred Wegener Institute. It will start on Monday March 30th at 10 o'clock from the regional airport Bremerhaven on an Arctic measurement campaign which will last about four weeks. Measurements of sea ice thickness and atmospheric variables in an area between Spitsbergen, Greenland, northern Canada and Alaska are at the centre of the project PAM-ARCMIP (Pan-Arctic Measurements and Arctic Climate Model Inter comparison Project). Up to twenty German and international researchers will carry out investigations in those areas of the Arctic where no data are yet available. Six research institutes from Germany (Alfred Wegener Institute), Canada (Environment Canada, University of Alberta, York University), the USA (NOAA) and Italy (ISAC Bologna) are involved in the project.

The extent of Arctic sea ice has declined stronger than predicted by climate models. However, little is known about changes of its thickness. Sea ice is in constant movement and it can become thicker by deformation than by freezing. Therefore, not only the areal extent of the ice is an important variable in the Arctic climate system, but also its thickness. "We hope to gain an appraisal of the whole Arctic ice volume for the first time ever in order to be able to compare the changes in the different regions", says Dr. Andreas Herber, physicist and in charge of the research aircrafts of the Alfred Wegener Institute. The operation of the research aircraft Polar 5 will allow for the first time to carry out large scale ice thickness measurements in Arctic key areas which could hitherto not be reached by the German research vessel Polarstern.

The joint sea ice team of the Alfred Wegener Institute for Polar and Marine Research in the Helmholtz Association and the University of Alberta are the only researchers worldwide who have carried out Arctic ice thickness measurements recently. Their results show a strong decrease of ice thickness in the central Arctic which was sporadically surveyed from RV Polarstern. However, nothing is known about changes in other regions.

This project breaks new ground in many ways. An ice thickness probe, the so-called EM-Bird, which is usually dragged below a helicopter, is now operated for the first time by a fixed-wing aircraft. The EM-Bird is towed under the hull of the aircraft by means of a winch for take-off and landing. For the surveys, the probe is towed on an 80 m long rope twenty metres above the ice surface. More extensive areas can now be investigated due to the longer range of the aircraft in comparison to a helicopter.

Further measurements of the vertical distribution of meteorological parameters like wind, temperature and humidity are carried out during the campaign by means of so-called drop probes sondes. The sondes are dropped from an altitude of five kilometres. "We will considerably improve regional Arctic climate models with our investigations", explains Prof. Dr. Klaus Dethloff, physicist at the research unit Potsdam and scientific head of the project at the Alfred Wegener Institute.

In total, 30 people from four nations - six research institutes and logistic institutions (like EAI Oshawa, Arctic Kingdom Toronto) from Germany, Canada, the USA and Italy - are involved in the project. The campaign ends April 27th in Oshawa, Canada, where Polar 5 will regularly be maintained and inspected. The logistically demanding campaign with residence in four neighbouring states of the Arctic is only possible due to the close international collaboration between the partners.

The Alfred Wegener Institute carries out research in the Arctic and Antarctic as well as in the high and mid latitude oceans. The institute coordinates German polar research and provides international science with important infrastructure, e.g. the research icebreaker Polarstern and research stations in the Arctic and Antarctic. The Alfred Wegener Institute is one of 15 research centres within the Helmholtz Association, Germany's largest scientific organization. 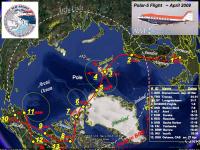