Though it's been at least a billion years since plants and animals shared a common ancestor, they have through the eons shared a common threat in the form of microbes, including bacteria, eukaryotes and viruses. This has resulted in remarkably similar mechanisms for detecting the molecular signatures of infectious organisms that hold promise for the future treatment of infectious diseases in humans.

The recognition of microbial signature molecules by host receptors is the subject of a paper published in the journal Science titled "Plant and Animal Sensors of Conserved Microbial Signatures." The corresponding author of the paper is Pamela Ronald, a plant pathologist who holds joint appointments with the U.S Department of Energy (DOE)'s Joint BioEnergy Institute, where she serves as Vice President for the Feedstocks Division and directs the grass genetics program, and with the University of California (UC) Davis, where she is a professor of plant pathology. Co-authoring the paper with Ronald was Bruce Beutler, an immunologist and mammalian geneticist with the Scripps Research Institute.

"If evolution is depicted as a tree, and extant species as terminal leaves on that tree, we must acknowledge that we have examined only a few of those leaves, gaining only a fragmentary impression of what is and what once was," Ronald says. "In the future, a diverse array of evolutionarily conserved signatures from pathogenic microbes will likely be discovered and some of these will likely serve as new drug targets to control deadly groups of bacteria for which there are currently no effective treatments."

In the Science paper, Ronald describes how the long-held presumption that the mechanisms of plant and animal defense against microbes are separate and distinct has undergone a complete change.

"Discoveries over the past 15 years demonstrate that the mechanisms that allow plants and animals to resist infection show impressive structural and strategic similarity," Ronald says. "We now know that plants and animals respond to microbial signature molecules using analogous regulatory modules, which likely came about as a consequence of convergent evolution."

"Characterization of new host sensors will pave the way to inter-specific and inter-generic transfer between plants of engineered receptors that confer resistance to a variety of pathogens," Ronald says, adding that this approach has already been demonstrated in transference work with cultivated rice and wheat varieties, as well as with tobacco and tomato.

"There may also be room to engineer resistance in vertebrates as well, including humans," she says.

In the Science paper, Ronald speculates that some microbes might be pathogenic to humans because they have managed to evade detection by human Toll-like receptors. Now that some of the essential building blocks of immunity have been elucidated, she believes it may be possible to manipulate these receptors so that microbes can no longer evade them.

The Joint BioEnergy Institute (JBEI) is one of three Bioenergy Research Centers funded by the U.S. Department of Energy to advance the development of the next generation of biofuels. It is a scientific partnership led by the Lawrence Berkeley National Laboratory (Berkeley Lab) and including the Sandia National Laboratories, the University of California campuses of Berkeley and Davis, the Carnegie Institution for Science, and the Lawrence Livermore National Laboratory.

Berkeley Lab is a U.S. Department of Energy national laboratory located in Berkeley, California. It conducts unclassified scientific research and is managed by the University of California for the DOE Office of Science. Visit our Website at www.lbl.gov/ 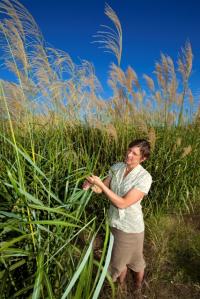