Enrico Ramirez-Ruiz uses computer simulations to explore the universe's most violent events, so when the first detailed observations of a star being ripped apart by a black hole were reported in 2012 (Gezari et al., Nature), he was eager to compare the data with his simulations. He was also highly skeptical of one of the published conclusions: that the disrupted star was a rare helium star.

"I was sure it was a normal hydrogen star and we were just not understanding what's going on," said Ramirez-Ruiz, a professor of astronomy and astrophysics at the University of California, Santa Cruz.

In a paper accepted for publication in the Astrophysical Journal and available online at arXiv.org, Ramirez-Ruiz and his students explain what happens during the disruption of a normal sun-like star by a supermassive black hole, and they show why observers might fail to see evidence of the hydrogen in the star. First author and UCSC graduate student James Guillochon (now an Einstein Fellow at Harvard University) and undergraduate Haik Manukian worked with Ramirez-Ruiz to run a series of detailed computer simulations of encounters between stars and black holes.

Supermassive black holes are thought to lurk at the centers of most galaxies. Some (known as active galactic nuclei) are very bright, emitting intense radiation from superheated gas falling into the black hole. But the central black holes of most galaxies in the local universe have run out of gas and are quiescent. Only when an unlucky star approaches too close and gets shredded by the black hole's powerful tidal forces does the galactic center emit a bright flare of light. Astronomers call this a "tidal disruption event" (TDE), and in a typical galaxy it happens about once every 10,000 years.

"That means you have to survey the nearest 10,000 galaxies in order to see one event, so for many years this was very much a theoretical field," Ramirez-Ruiz said.

Then came Pan-STARRS (Panoramic Survey Telescope and Rapid Response System), which is surveying the sky on a continual basis and has begun detecting and recording observations of these very rare events. The first one, known as PS1-10jh, was detected in 2010 and published in 2012. Astronomers recorded the light curve (the rise and fall in brightness over time) and took a spectrum at peak brightness to study the different wavelengths of light.

The spectrum of an active galactic nucleus (AGN) shows characteristic "emission lines" at specific wavelengths corresponding to the most common elements such as hydrogen and helium. These emission lines appear as spikes of increased intensity in a continuous spectrum. The shocking thing about PS1-10jh was the absence of a hydrogen line in the spectrum.

"It's very unusual to have seen helium and not hydrogen. Stars are mainly made of hydrogen, and stars made only of helium are extremely rare, so this was a huge issue," Guillochon said. "People said maybe it was a giant star with a helium core and a hydrogen envelope, and the black hole removed the hydrogen first and then the helium core in a second pass."

Guillochon began to explore the possibilities using computer simulations. The results provide a new understanding of the origin of the emission lines in a tidal disruption event. They show that the flare of light from a tidal disruption contains information about the type of star and the size of the black hole. And they show that PS1-10jh involved the most common type of star (a main-sequence star much like our sun) and a relatively small supermassive black hole.

When a star gets disrupted by a supermassive black hole, the tidal forces first stretch the star into an elongated blob before shredding it. In a full disruption, about half of the star's mass gets ejected and the other half remains bound in elliptical trajectories, eventually forming an "accretion disk" of material spiraling into the black hole.

According to Ramirez-Ruiz, it is like watching the birth of an active galactic nucleus. The emission lines in a TDE correspond to the well-studied "broad line region" of AGNs. In an AGN, the emission lines of different elements are produced at different distances from the central black hole. Helium lines are produced deep in, while hydrogen lines are produced farther out where the intensity of ionizing radiation is slightly lower. When the spectrum of PS1-10jh was taken, the accretion disk simply had not grown big enough to reach the distance where hydrogen starts to produce an emission line.

"The hydrogen is there, you just don't see it because it is so highly ionized. The way to understand the spectrum of a TDE is to think of it as an AGN with a truncated disk, because the disk is still growing," Guillochon said. "In an AGN, the emission is steady because the disk is established. In our model of tidal disruption, you are seeing the broad line region being built."

More recently, another TDE was detected (PS1-11af), and its spectrum had neither hydrogen nor helium emission lines. "Our model tells us that this would have to be a smaller black hole, and when the spectrum was taken the disk was so small you would not expect to see either hydrogen or helium," Guillochon said.

According to Ramirez-Ruiz, Pan-STARRS is expected to detect dozens of tidal disruptions, and the planned Large Synoptic Survey Telescope (LSST) could detect thousands per year. This means that astronomers will be able to study quiescent black holes at the centers of local galaxies that would otherwise be difficult if not impossible to detect. If it is not emitting light, a supermassive black hole reveals its presence only through its effects on the motions of stars, and the smaller the black hole, the harder it is to see those effects.

"We are now detecting black holes that are very close to the detection limit," Ramirez-Ruiz said. "Tidal disruption is elucidating a local population of low-mass quiescent black holes, and it is going to enable us to test the idea that every galaxy has a black hole at its center, even the tiny ones."

When a black hole shreds a star, a bright flare tells the story 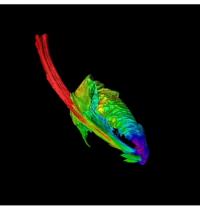