A study conducted by the Zoological Society of London (ZSL) has revealed the importance of single males in small, threatened populations. Results from a study of endangered New Zealand hihi birds (Notiomystis cincta), published this week in Evolutionary Applications, showed that bachelor males who don't hold breeding territories, known as 'floaters', could help maintain genetic diversity and decrease the likelihood of inbreeding by sneakily fathering chicks.

These underestimated individuals are vital to the long-term survival of small populations, such as in the hihi, a rare bird found only in New Zealand. There are thought to be only 2,000 individuals left in the wild, making them extremely vulnerable to natural disasters or disease, of which a single severe incident could wipe out the whole species.

While floaters have much lower breeding success rates than coupled males, in hihis they are able coerce females, which are already coupled up, into mating. This has been shown to have a small but significant impact on population size by increasing the number of breeding birds, as well as influencing the sex ratio. These factors are important in maintaining genetic diversity and decreasing levels of inbreeding.

Dr Patricia Brekke, researcher at ZSL and the lead author of the study, said: "Conservation management often discounts individuals that are thought to be unable to produce offspring, thinking that they have no effect on populations. We have shown that in hihi, floaters are able to reproduce and pass on their genes from one generation to the next, which helps with long-term survival of this endangered bird.

"Despite being difficult to study, as they have no fixed abode, we should pay more attention to these bachelor males as they can potentially have a big effect on genetic diversity and therefore the survival of species with very few individuals remaining. Not taking floating individuals into account can undermine our conservation efforts."

The hihi is one of the world's most evolutionarily unique birds, classed as the only member of its own family, and were lost from New Zealand's North Island by around 1895 because of introduced predators such as rats, habitat loss due to farming and disease. They are the only bird species in the world to mate face-to-face like humans.

Floating behaviour has been observed in a variety of animals including fish, mammals and insects. Floating can be a successful breeding strategy as bachelor males avoid investing their energy into defending territory and looking after chicks, instead spending time searching for mates. In hihi birds, floaters tend to be either younger males (around a year old) that are inexperienced at holding a territory or older males (over five years) who lack the energy to defend territory. Their 'homelessness' makes them difficult to study as they travel between different areas looking for food and potential mates.

Conservation efforts to save the species began in the 1980s and involves reintroducing birds to different islands and mainland reserves. ZSL has so far been involved in establishing three reintroduced populations, but these are all small (less than 150 birds each) and so hihi remain in a precarious situation.

Vagrant bachelors could save rare bird 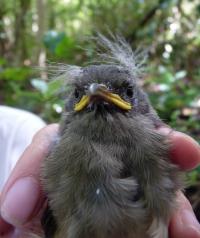 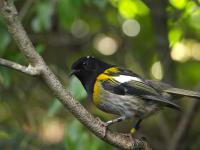