Human white blood cells, known as leukocytes, swim using a newly described mechanism called molecular paddling, researchers report in the September 15th issue of Biophysical Journal. This microswimming mechanism could explain how both immune cells and cancer cells migrate in various fluid-filled niches in the body, for good or for harm.

"The capacity of living cells to move autonomously is fascinating and crucial for many biological functions, but mechanisms of cell migration remain partially understood," says co-senior study author Olivier Theodoly of Aix-Marseille University in France. "Our findings shed new light on the migration mechanisms of amoeboid cells, which is a crucial topic in immunology and cancer research."

Cells have evolved different strategies to migrate and explore their environment. For example, sperm cells, microalgae, and bacteria can swim through shape deformations or by using a whip-like appendage called a flagellum. By contrast, somatic mammalian cells are known to migrate by attaching to surfaces and crawling. It is widely accepted that leukocytes cannot migrate on 2D surfaces without adhering to them.

A prior study reported that certain human white blood cells called neutrophils could swim, but no mechanism was demonstrated. Another study showed that mouse leukocytes could be artificially provoked to swim. It is widely thought that cell swimming without a flagellum requires changes in cell shape, but the precise mechanisms underlying leukocyte migration have been debated.

In contrast to previous studies, Theodoly, co-senior study author Chaouqi Misbah of Grenoble Alpes University, and their collaborators provide experimental and computational evidence in the new study that human leukocytes can migrate on 2D surfaces without sticking to them and can swim using a mechanism that does not rely on changes in cell shape. "Looking at cell motion gives the illusion that cells deform their body like a swimmer," Misbah says. "Although leukocytes display highly dynamic shapes and seem to swim with a breast-stroke mode, our quantitative analysis suggests that these movements are inefficient to propel cells."

Instead, the cells paddle using transmembrane proteins, which span the cell membrane and protrude outside the cell. The researchers show that membrane treadmilling--rearward movement of the cell surface--propels leukocyte migration in solid or liquid environments, with and without adhesion.

The researchers propose that continuous paddling is enabled by a combination of actin-driven external treadmilling and inner recycling of actin-bound transmembrane proteins through vesicular transport. Specifically, the paddling proteins at the rear of the cell are enclosed inside a vesicle that pinches off from the cell membrane and transported to the front of the cell. By contrast, the non-paddling transmembrane proteins are sorted out and do not undergo this process of internal recycling through vesicular transport.

"This recycling of the cell membrane is studied intensively by the community working on intracellular vesicular traffic, but its role in motility was hardly considered," Theodoly says. "These functions of protein sorting and trafficking seemed highly sophisticated for swimming. Our investigations, to our own surprise, bridge such distant domains as the physics of microswimmers and the biology of vesicular traffic."

The authors say that molecular paddling could allow immune cells to thoroughly explore all locations in the body as they migrate in liquid-filled niches such as swollen body parts, infected bladders, cerebrospinal fluid, or amniotic fluid. Moving forward, the researchers plan to investigate the functions of molecular paddling in various environments and assess whether other types of cells use this mode of migration.

The work was supported by the French Agence Nationale de la Recherche, the LABEX INFORM, the Région Sud, the Turing Centre for Living systems, the Excellence Initiative of Aix-Marseille University-A*MIDEX, a French ''Investissements d'Avenir'' program, and the company Alveole.

The Biophysical Journal (@BiophysJ), published by Cell Press for the Biophysical Society, is a bimonthly journal that publishes original research and reviews on the most important developments in modern biophysics--a broad and rapidly advancing field encompassing the study of biological structures and focusing on mechanisms at the molecular, cellular, and systems levels through the concepts and methods of physics, chemistry, mathematics, engineering, and computational science. Visit: http://www.cell.com/biophysj/home. To receive Cell Press media alerts, contact press@cell.com. 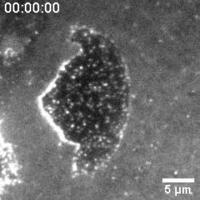